The mid-1970s brought about an urgent need for new coal hoppers based upon a combination of robust utility and export demand as well as an aging coal fleet composed of mostly smaller-capacity, 50 and 70-ton coal hoppers. Additionally, the opening of new low-sulfur coal mines in the Powder River Basin (PRB) region of Wyoming and Montana introduced a new supply of coal to the market, driving new coal hopper orders. 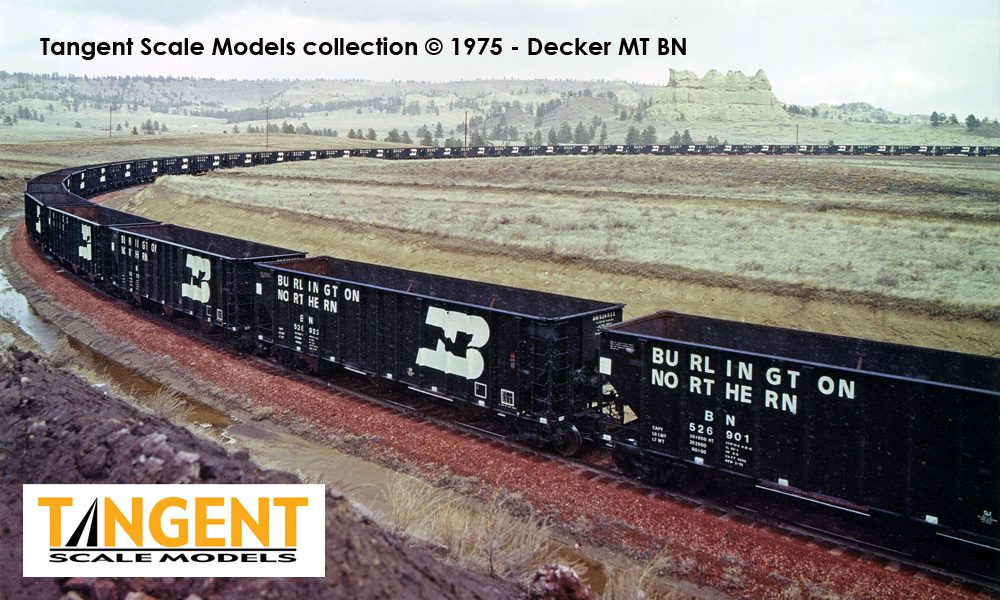 Pullman-Standard was one of several railcar manufacturers that addressed this urgent demand for modern “Triple” 100-ton hoppers with new designs produced in 1975-1976. While western and midwestern customers purchased Pullman’s 4000 cubic foot models, the eastern roads purchased Pullman’s 3526/3600 cubic foot hoppers, which effectively had shorter sides to accommodate higher density coal. We have produced both the “western” and “eastern” Pullman-Standard coal hoppers, and we offer models in multiple railroad-specific variations. The signature identifying feature for most of these cars? The distinctive Pullman “trapezoid” indentations on the flat panels (not all cars had flat panels, but most did). Here is a shot of a Burlington Northern PS4000 car, where we have highlighted the trapezoid on the side of one of the panels: 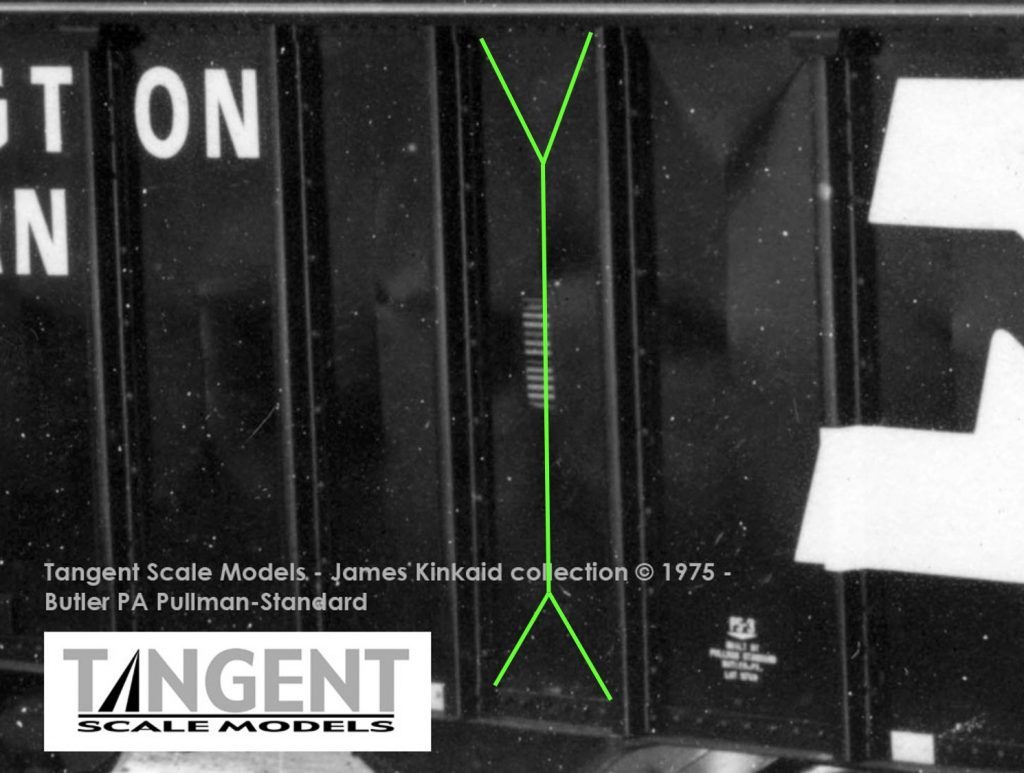 These Pullman-Standard cars stand out and look visually different from other “triple” 100-ton coal hoppers from that era. Besides the “trapezoid” on the panels, each car also has shaker bracket parts applied to the top chord in eight locations. 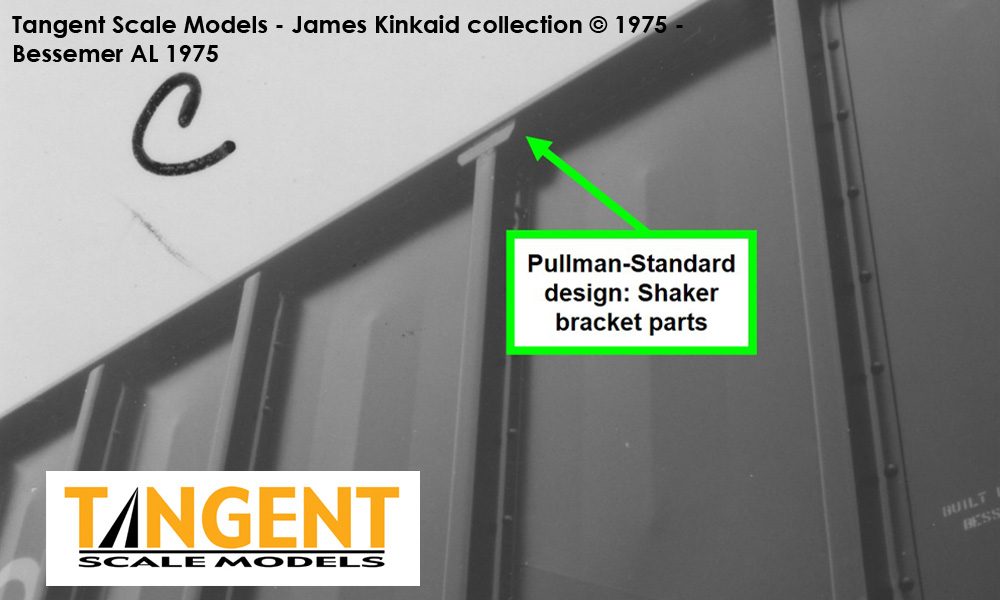 Additionally, the phases of PS4000 HT “western” Pullman-Standard cars come in one of two possible configurations:

The other PS4000 HT “western” cars have identical bolsters spacing on each end of the car. 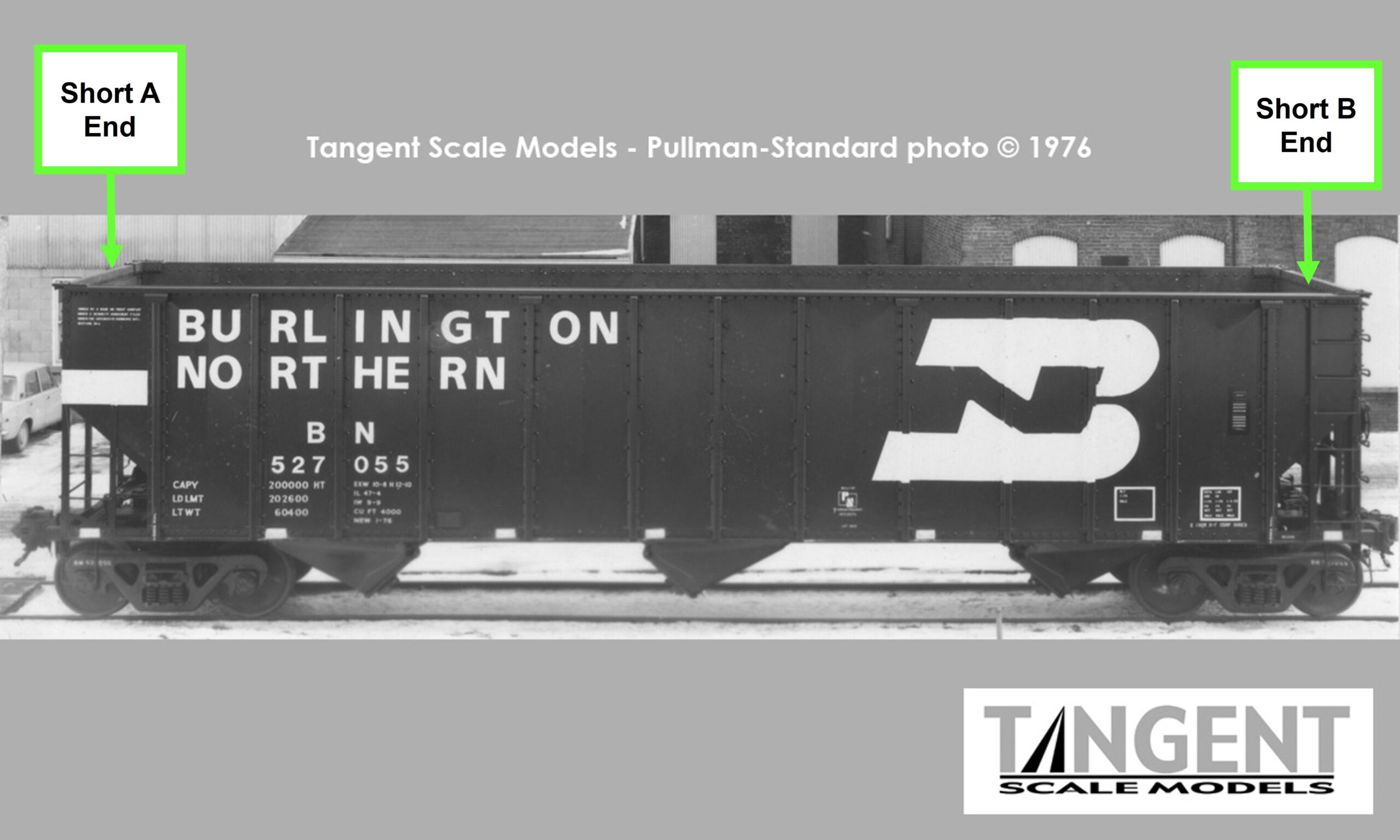 The largest buyer of the Pullman-Standard PS4000 HT coal hoppers was Burlington Northern (BN). BN bought these cars for the new railroad line that was built into the Powder River Basin. The BN (and subsidiary Colorado and Southern) cars were delivered in four total orders in 1975-1976. The BN scheme is easily one of the sharpest schemes applied to these Pullman cars. The classic Burlington Northern billboard scheme was applied with white stencil lettering on a black car, with white rectangles on the end and slope sheets to designate the rotary end. Some of the car fleet was repainted in the 1980s with full white ends and we will offer those down the road, but these samples from BN’s massive fleet of almost 1,200 cars are the statistically relevant scheme for BN’s largest coal hopper fleet.

BN purchased the two different “configurations (phases)” of the Pullman-Standard PS4000 HT coal hoppers. Both phases had the distinctive Pullman “trapezoid” indentations on the side panels. The first order, offered in our first production in November 2020, had the “short B end, long A end” body configuration with offset truck bolster spacing. Our 2022 production offers the “short B end, short A end” body configuration. This 1975+ scheme lasted into the BNSF era so is relevant for all modelers. 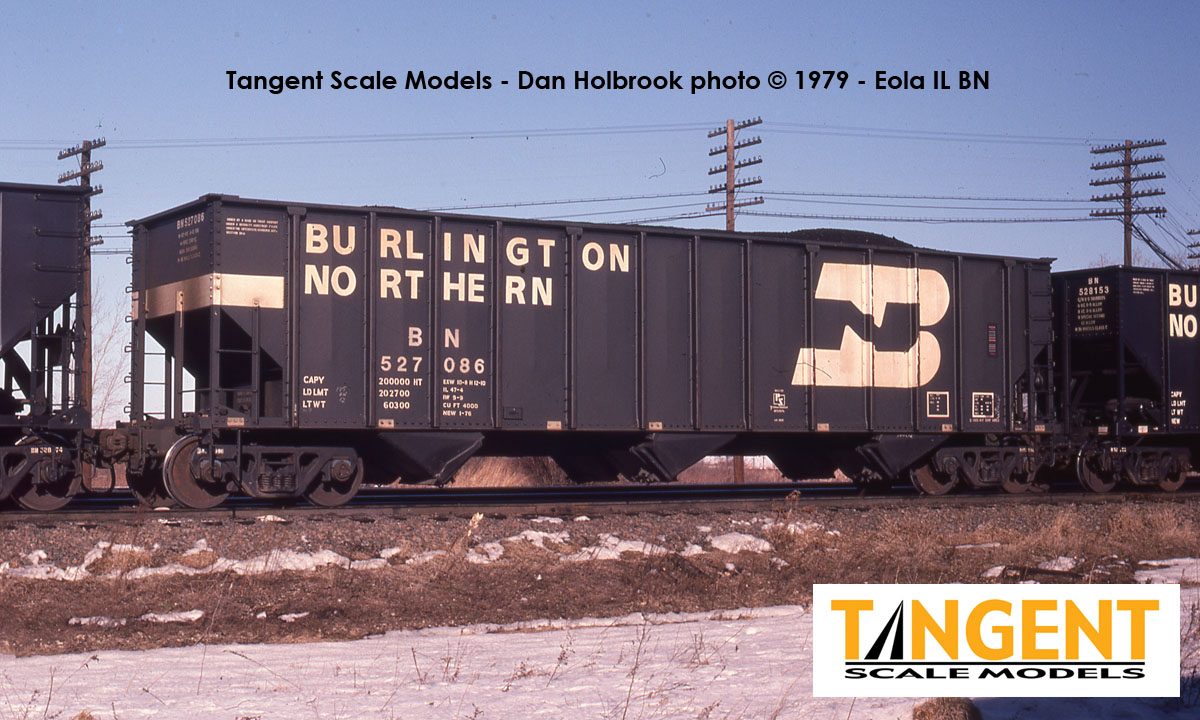 More than two decades later, the cars were still used by BNSF. While utility coal is most often thought of as the use for hoppers, don’t forget that they were also used to deliver coal to ocean/river/lake transload operators. Here is a train of BN triple hoppers returning from dumping coal at an ocean transload facility in Roberts Bank, Vancouver, Canada, operating behind “old school” SD40-2s (since by this point SD70MACs had infiltrated most coal moves). This train is operating across MRL and is at the summit of Bozeman Pass headed to Laurel MT, where it will interchange back to BNSF to continue its return trip back to the Powder River Basin. 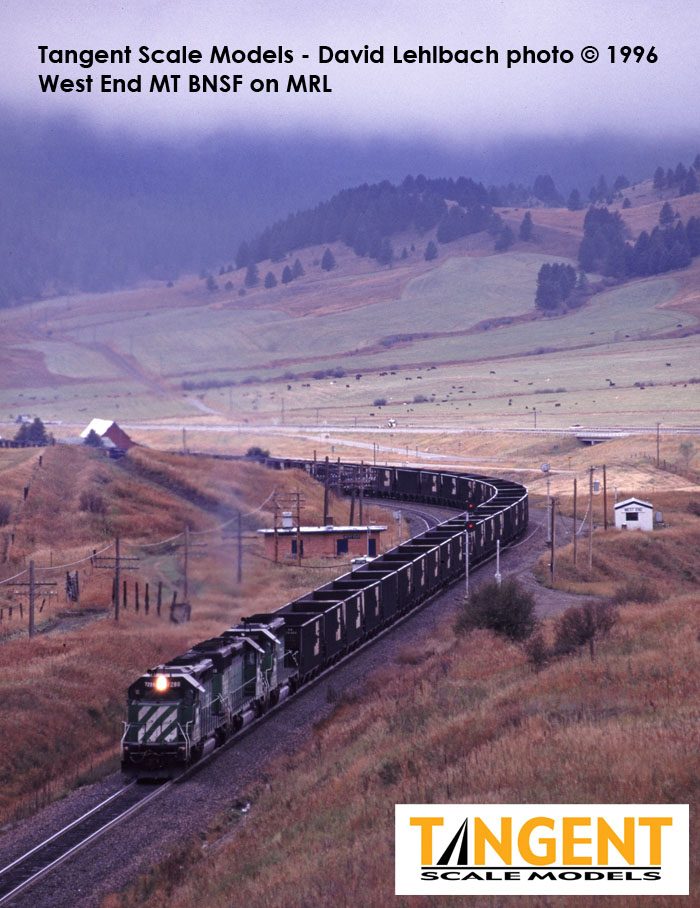 For a certain period of time, BN (and UP) interchanged unit trains of coal to Chicago Central and Pacific (CC&P), a regional who operated the former Illinois Central from Council Bluffs to Chicago. CC&P hauled these coal trains from Council Bluffs to a coal transload operation on the Mississippi River at E. Dubuque IL. Here a BN coal train of these three-bay hoppers is dumping coal on CC&P at E. Dubuque IL: 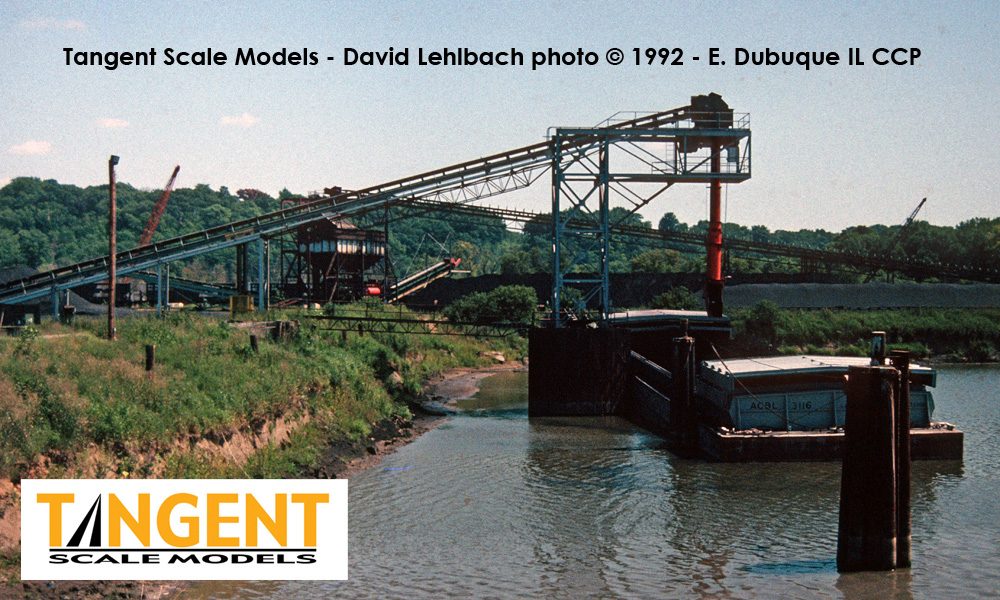 Here is a shot of a train after it had finished dumping coal, operating on BN trackage rights (ironically) to get to the former Illinois Central to cross the Mississippi River and proceed across Iowa to interchange the train of coal empties back to the BN at Council Bluffs. (There are also photos of C&NW/UP coal hopper sets in this service, with C&NW 3-bay hoppers and UP quad hoppers like the Tangent models). 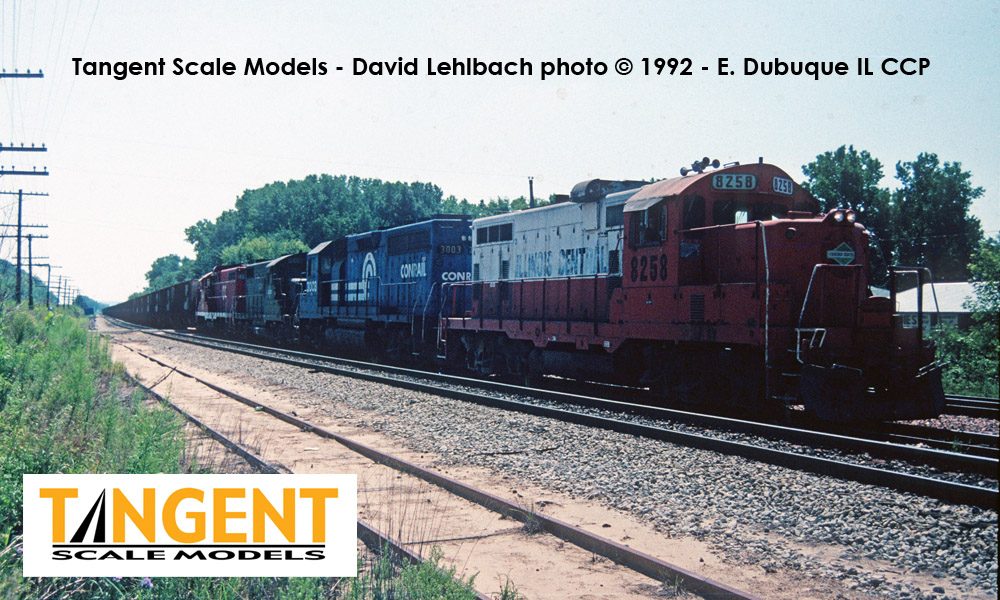 Chicago & North Western (C&NW) operated into the Powder River Basin from the South end on a new alignment, and used UP haulage rights between Fremont/Council Bluffs and Joyce NE (Near South Morrill) to access this “island” railroad segregated from the core C&NW system. Like BN, C&NW also needed significant new cars for Powder River Basin coal and for car sharing with UP in and out of the Hanna Basin area of Wyoming. Here is a shot from 1978 taken at Cheyenne WY where staging of trains to and from the Hanna Basin took place. Note the C&NW cars next to the UP system quad hoppers (also a Tangent Scale Models product). 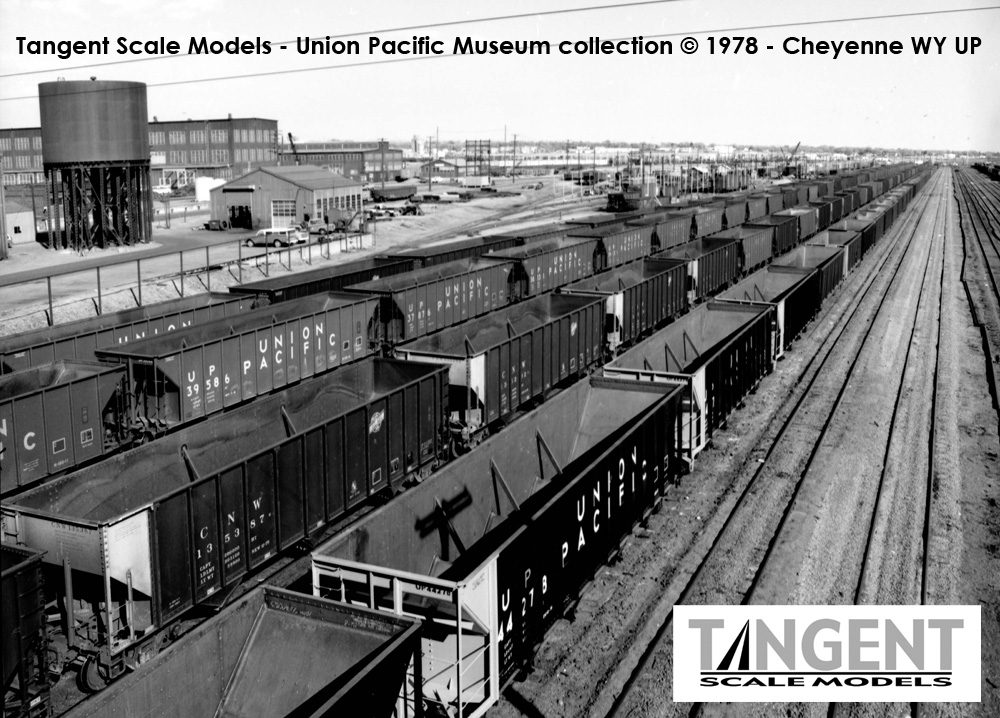 C&NW applied an all black paint scheme to their Pullman-Standard cars. C&NW’s paint and lettering specification was for the classic “ball and bar” scheme with white painted ends to designate the rotary end of the car. Interestingly, this specific series of C&NW cars did not have the distinctive Pullman-Standard trapezoids on the car sides but instead had flat panels. These cars were similar to the BN cars because they had the “short B end, long A end” body configuration with offset truck bolster spacing, although they had ladders on the left side of the car instead of grab irons. 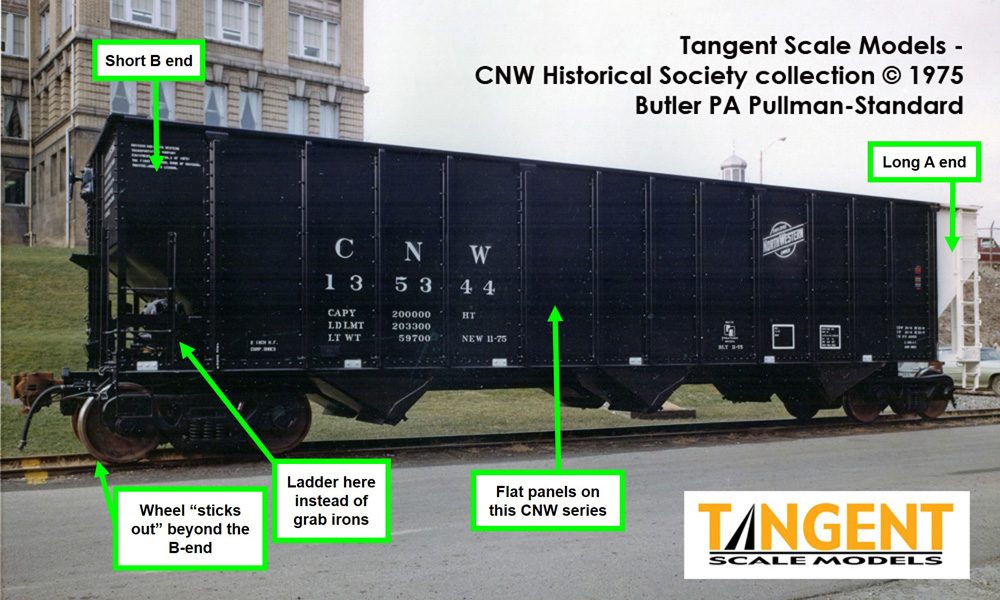 Some of the C&NW cars were repainted in the 1980s in a program repaint program. The cars were repainted into Clinton green with yellow ends, which lasted well into the 2000s. CNW’s paint and lettering specification included yellow ends to designate the rotary end of the coal hopper. The scheme includes the classic “ball and bar” scheme with a red ball and black bar. Aside from coal service, these cars were used in coke, aggregate, and tie services as well later in life. 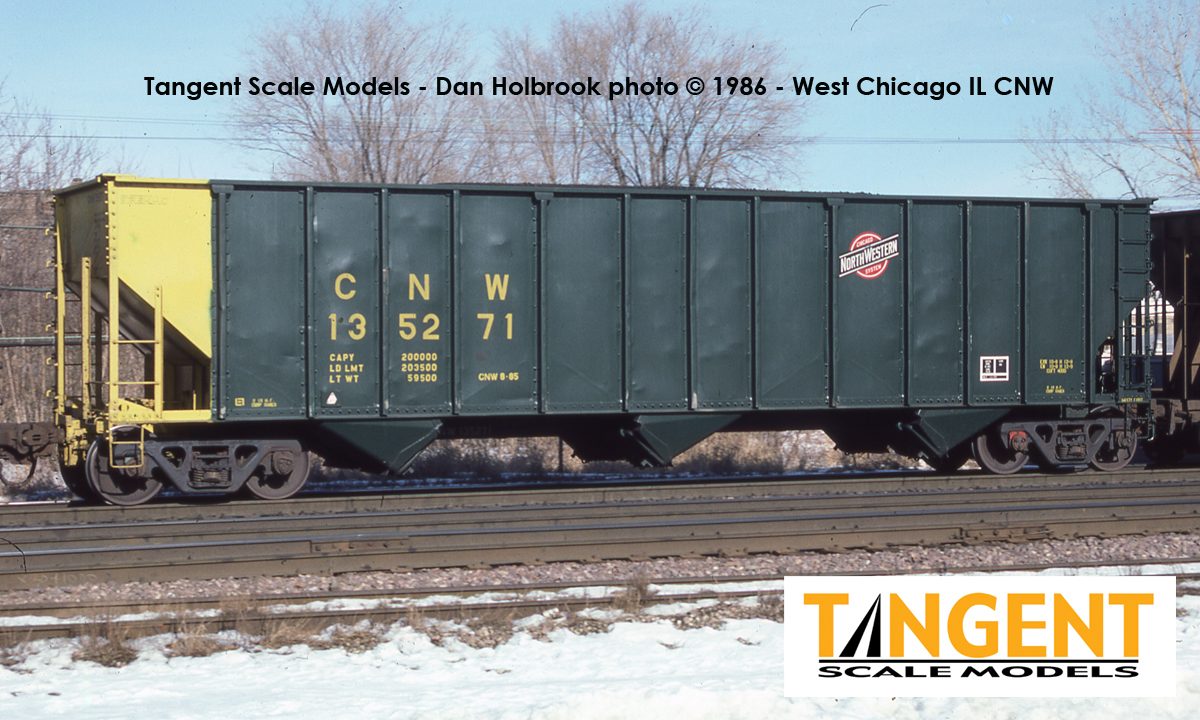 Starting in the 1980s, the CNW cars were mixed with the UP 3600 Quad Hoppers (also a Tangent product) in unit trains. Here is a shot of mixed CNW triples and UP quads on a train that originated in the Powder River Basin, running on the CNW mainline in Iowa. 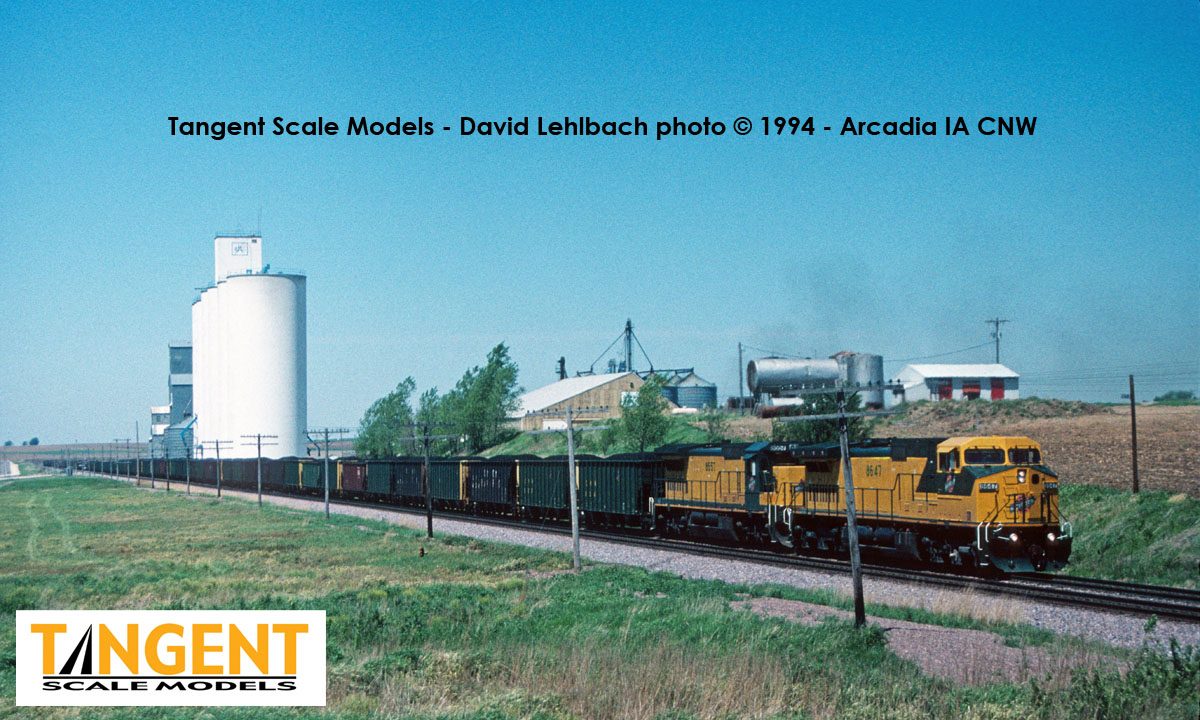 Chessie/B&O, Chessie/WM, and Southern each purchased the “eastern” PS3526/3600 HT coal hoppers. The engineering and appearance of the PS3526/3600 HT models is identical to the aforementioned PS4000 HT model, including the “trapezoidal” indentations in the car sides, however they have lower car sides than the PS4000 HT. A key difference in the eastern car design is the lack of rotary equipment, so the bolsters are symmetrical like typical freight cars. 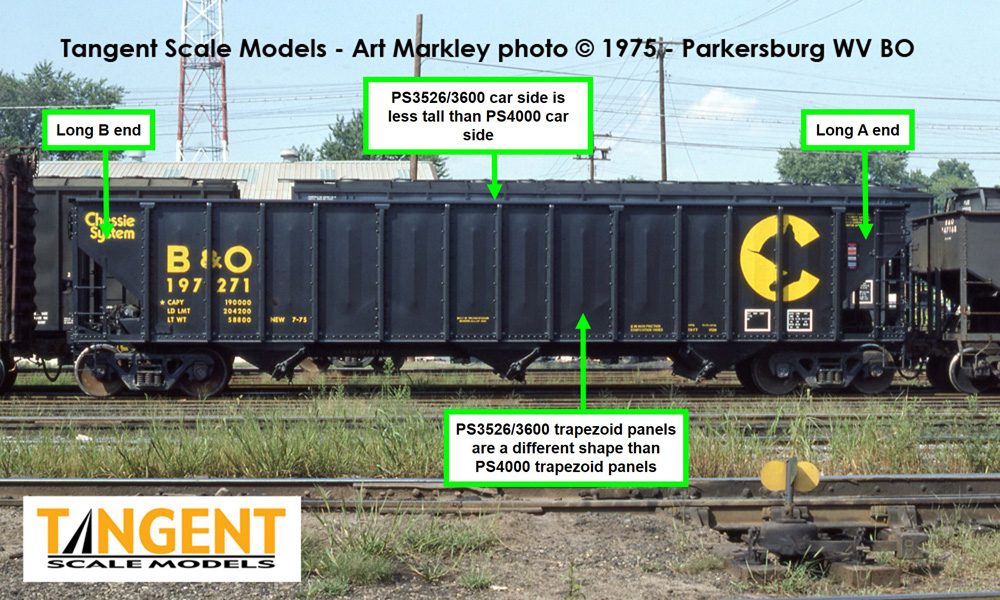 The Chessie B&O series of coal hoppers was large – totaling 2,500 cars. These cars have black carbodies and include Chessie yellow graphics including the Chessie cat logo and the “Chessie System” stenciling in the upper left side panels. These cars also have “B&O” and road number stenciling applied to the underframe. While the Chessie System lines operated a myriad of coal hopper types, this one looks completely different from the others. Here is a group of them loading at the Eastern Associated Coal Harris Mine in Harris WV. 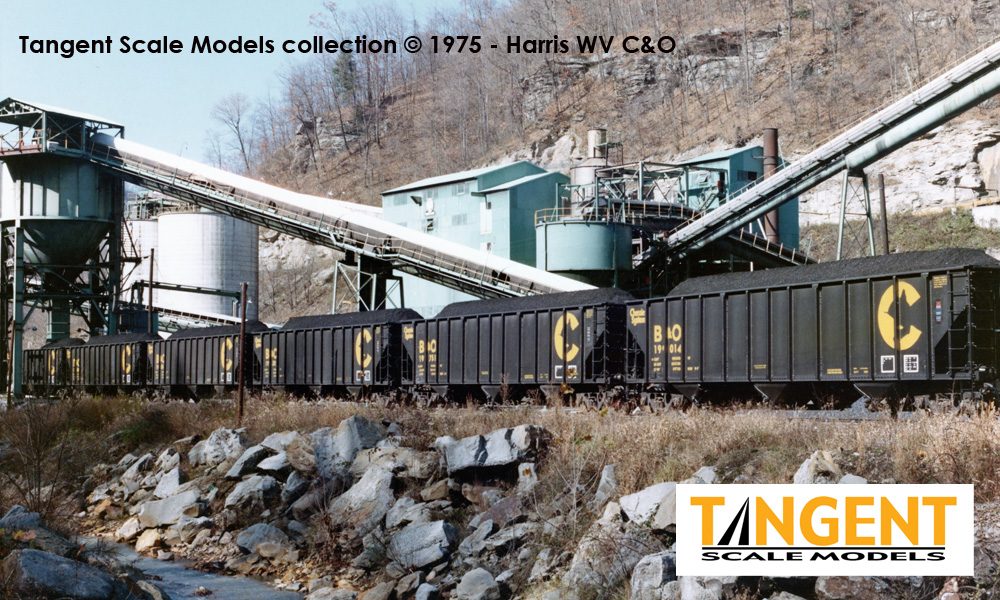 The Southern cars were rated at 3600 cubic feet, although they are dimensionally the same as the Chessie 3526 spec. The Southern PS3600 coal hoppers were delivered in the typical red paint with SOUTHERN spelled out on the side. The Southern carbody version features Southern-specific “open style” ends and SC-1 Empty-Load Brake Equipment details. Check out those details, with a parallel-mounted air reservoir and additional piping for the SC-1 Equalizing Reservoir! The PS3600 cubic foot hoppers purchased by Southern also had low-mount handbrake housings, another distinction from the Pullman-Standard Chessie/B&O prototypes. 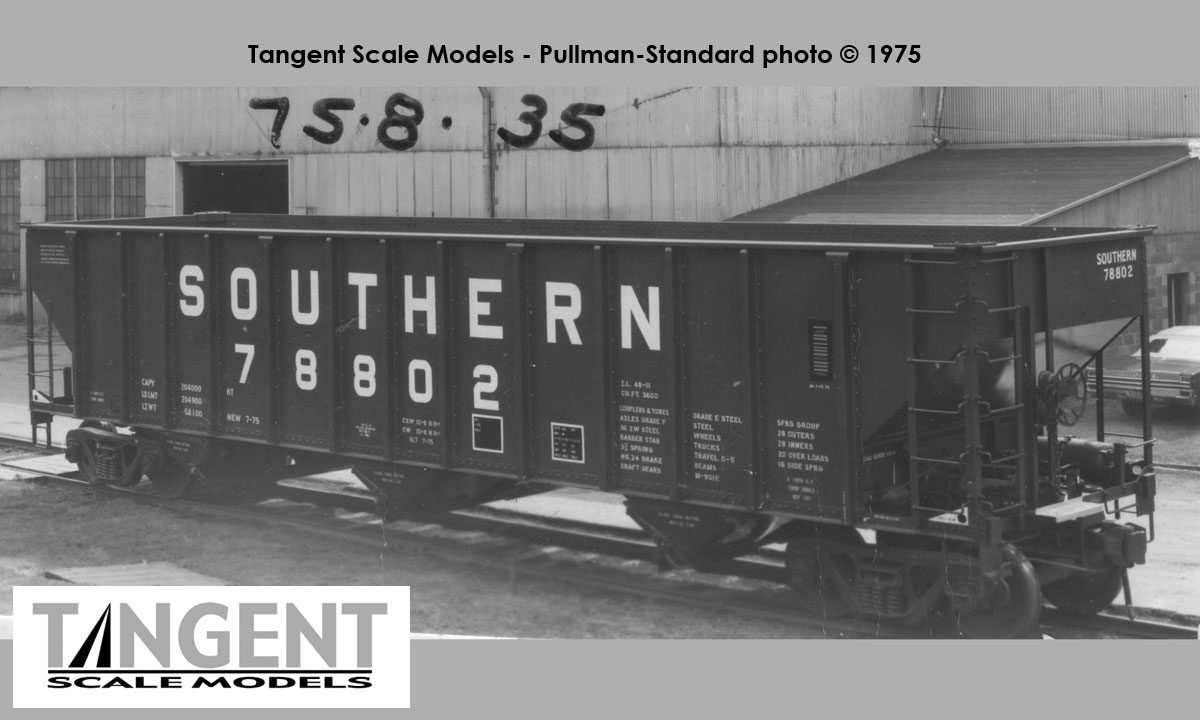 Our system of 3526/3600/4000 models being released today build up to represent five major prototype variations. Starting with the “western” or PS4000 HT variations (not to be confused with our “LO” covered hopper models), our system of models includes three different body shells and their corresponding production details, reflecting the most significant designs Pullman-Standard produced from 1975-1976. Our model is a dimensionally-accurate replica of the real car, and includes build details such as brake housings, brake wheels, and truck bearings. This replica includes our “near-scale” draft gear box including side “key” detail. Our ready-to-operate replica is finished with coupler lift bars, rubber air hoses, Kadee® scale couplers, CNC-machined wheels, and sufficient hidden weights to ensure the model operates as good as it looks. Finally, our model includes a realistic “flood load” exactly modeled from example PRB load practices in these Pullman-Standard cars.

The Tangent Scale Models “eastern” or PS3526/3600 HT includes two primary build variations to reflect the significant production details found on the cars purchased by Chessie/B&O, Chessie/WM, and Southern. The engineering and appearance of our PS3526/3600 HT models are identical to the aforementioned PS4000 HT model, including the “trapezoidal” indentations in the car sides, however they have lower car sides than the PS4000 HT. A key difference in the Eastern car design is the lack of rotary equipment, so the bolsters are symmetrical like typical freight cars. Finally, our PS3526/3600 models include a realistic “tipple load” modeled after typical eastern mine load practices.

The Tangent PS3526/3600 and PS4000 system of coal hoppers offer a multitude of detail variations and phases to replicate the many different Pullman-Standard offerings.