The Tangent Scale Models prototype replica of the Union Pacific Bethlehem design quad hopper has never been produced in N scale, making it a distinctive addition to any freight car fleet. Our stunning N Scale Quad Hopper model is loaded with detail. We set out to produce an N Scale car that is worthy of the Tangent brand, bringing as much of our industry-leading HO Scale execution and detail as possible packed in an N Scale box.

We maintain strong emphasis on accurate reproduction of the prototype, as well as disciplined execution of each model. Finally, we design our products to be utilized in operating environments (please see the list below). Notable callouts for our new UP Bethlehem Steel 3600 Cubic Foot Quad Hopper include:

Our first production is available in the following 12 Union Pacific scheme variations, covering all eras of original paint and repaint possibilities. We are also offering an assembled, painted and unlettered model if you want to “finish your own masterpiece.” A wide selection of paint schemes and roadnumbers are available to allow customization of trains appropriate for your modeling era.

Check them out now by clicking here. You will also find a handy Tangent Scale Models visual guide available online, laying out all our UP schemes and options.

And as usual, all our offerings below feature photos on our website showing the actual model and the prototype cars! 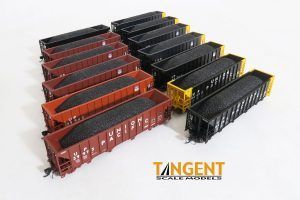 NEW: Union Pacific “Original 1977 H-100-16” in the classic, as-delivered “Freight Car Red” paint with large Union Pacific spelled out in white. Please note these red cars include painted trucks to match the carbody color, just like UP paint practices! Available in 12 all new numbers for 2018!

NEW: Union Pacific “Original 1978 H-100-17” in the as-delivered “All-Black” paint with yellow ends designating the rotary coupler ends. This scheme includes the large Union Pacific spelled out in white on the carside. Individual car numbers are printed on the trucks, just like the prototypes. Because these cars initially operated in unit train services, they are available in 12 all new numbers for 2018!

NEW: UP “Original 1979 H-100-18” Double Rotary in the as-delivered 1979 Black with Yellow Double Rotary Ends. There were exactly 2 prototype cars in this H-100-18 class, so the same 2 numbers are back for 2018 since many people missed these during our initial offering.

NEW: UP “1986 H-100-16 Red Repaint” replicates an example of a 1986+ era UP simplified repaint with the left-justified style reporting marks. Available in 1 number.

NEW: UP “1989 H-100-16 Red Repaint” is an example of a 1989+ era UP simplified repaint. Check out the old ACI label bars showing through the paint, just like the prototype. Available in 1 number.

NEW: UP “H-100-19 Black Repaint Conspicuity 2005+” replicates a very interesting 2005+ era car in the 1990s black and yellow repaint scheme. Check out the black end: The prototype car end reporting marks were mis-applied, and we duplicated that same “typo” detail on our model. Of course, the prototype photo is available on our website!. Available in 1 number.

NEW: Undecorated RTR Black which we are pleased to offer for those who still enjoy painting and lettering their own masterpieces. We are modelers, and we get it! This car is assembled, painted black, and ready for decals.

Do not miss out on the Tangent Scale Models Bethlehem Steel Design Quad Hoppers, the workhorses of the Union Pacific Coal Hopper fleet. Pricing for these RTR models is $32.95.