Here are two prototype views of TLDX 9036, an Agland Inc. PS4740 covered hopper. First, here it is with its very fatigued paint in 2002, photographed by Dan Holbrook. 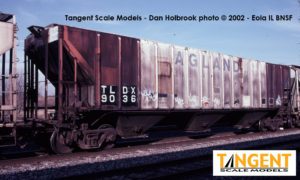 The second photo is the same car, photographed by the PS company photographer in 1967 before being delivered for revenue service. 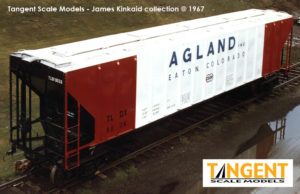 The stenciling and paint on this early PS4740 is fascinating. It kind of looks like a Landmark paintjob – although it predates Landmark – but has a white roof which is very unusual for PS covered hoppers. The stenciling on the side identifying Eaton Colorado is blue, while the remaining standard Pullman stenciling is black. There is a red-white-black COOP logo in the center of the car. Agland had a total of 4 cars split between two small lots – 9036 is from the earlier of the two. Eaton Colorado is one of several towns located on UP’s Greeley Subdivision which ran (still runs) between Denver and Cheyenne. 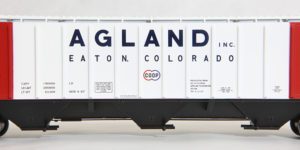