Tangent Scale Models is pleased to announce that our HO scale Pullman-Standard PS-2CD 4740 covered hopper is back and is available NOW in ELEVEN RTR paint schemes, plus undecorated kits. This production focuses on prototype cars manufactured in the 1967-1969 period. 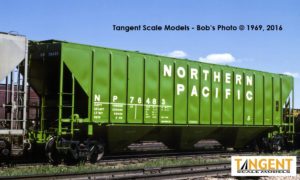 Pullman-Standard originally produced these game-changing covered hoppers between 1966 and 1972, and some continue to serve today throughout the US, Canada, and Mexico. The Tangent Scale Models HO-scale replicas are a perfect addition to your layout or collection, and we continue to listen to your roadname desires with our industry-leading covered hoppers.

This is not a pre-order announcement. Our October 2016 release is available for sale now – no preorders required. Click here! Our new release includes the following roadnames:

– Great Northern “Original Sky Blue 8-1967” in the “sky blue” as-built scheme from 1967, including the large and distinctive circular “Rocky” logo. This is a new run that includes 6 all-new road numbers. These are stunners, don’t miss out!
– Illinois Central “Original Gray 1969” in the gray as-built IC scheme from 1969, including the beautifully-replicated “split I-rail” on the side of the car. This is a new run that includes 6 all-new road numbers, with examples of this scheme lasting into the CN era.
– CC (Chicago Central) “Former IC Restencil” in the same gray as-built IC scheme as listed above, except this car is offered as a CC paintout car for regional railroad Chicago Central, created in 1985 from most of the Illinois Central Iowa Division. This car was transferred back to Illinois Central ownership in 1996, and later was purchased by CN. We are offering one road number for this car that matches the prototype car’s paintout characteristics. This car remains in service today under CN ownership.
– Northern Pacific “Original 1969” in the original green NP scheme, which is how these cars were delivered in 1969. We matched the Northern Pacific Railway Historical Association color sample for this car to ensure the correct “pre-BN” green! This scheme has been highly-requested by many of our customers and these stunners are now available in 6 road numbers.
– Western Maryland “Original Gray 1967” in the gray as-built “speed lettering” scheme that has been highly requested by WM, Chessie, and CSXT fans alike. We are proud to offer these beauties in 6 road numbers.
– TLCX “Landmark Columbus OH Original 1968” in the original red, white, and black scheme bearing the Columbus Ohio elevator lettering. This is our third Landmark scheme offering, but the first to be offered on our PS4740 prototype model. Our industry-leading Pullman-Standard cars are meant to go together as a set, and this release allows you to accurately model a block of these on a Chessie train to the Port of Baltimore, a single car on a BN grain train to Tacoma, or something in between. These cars led a varied service life, and they are available in four road numbers. Don’t miss out!
– TLDX “Agland, Eaton CO Original 1969” in the original red, white, and black Colorado lease scheme with accurate large blue lettering. This car is a stunner, and is complete with a prototypically-correct white roof. Available in 2 road numbers, this continues our theme of Union Pacific Greeley Subdivision lettered elevator PS4740 cars. Proudly displaying the COOP logo, these cars became nationwide lease cars in 1987.
– TLDX “Maher, Courtland KS Original 1967” in the original light “federal standard” green and black scheme, with white lease stenciling. This is our first state of Kansas lease car to be offered and it is available in two road numbers. Courtland was served by both Rock Island and ATSF, and these cars were moved to general lease pool service in the 1980s.
– TLDX “Rogers, Cynthiana IN Original 1967” in the original light “federal standard” blue and black scheme, with white stenciling. Our Indiana offering for this run is available now in two road numbers.
– TLDX “Gray Lease 1997+” is a gray general service repaint lease car that was repainted into a “plain gray modern repaint” car in 1997. This represents a more modern repaint for our customers requesting more modern schemes. Like all cars, see our website for a prototype photo.
– TLDX “Yellow Lease 1970+” is from a series of former private elevator cars that were repainted into a generic yellow scheme in 1970. Unlike typical TLDX factory paint jobs that included black underframes and ends, this series received a yellow-only paint job with no black highlights.
– Undecorated kits in two variations – we are pleased to once again offer undecorated kits so you can build your own custom models, with your choice of Morton or with Apex running boards.

That wraps up our update for today, and thank you for supporting the family-owned businesses in our industry!