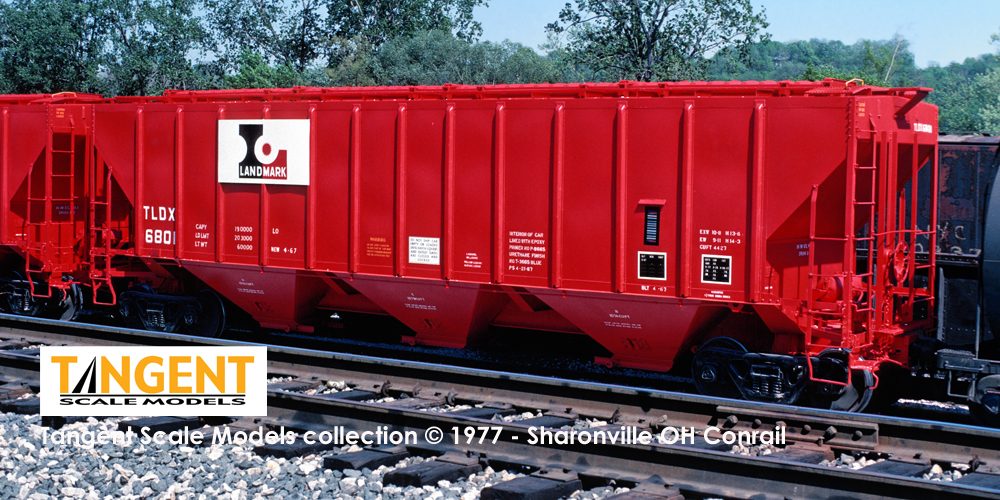 During the 1960s, railcar builders experimented with covered hopper designs to satisfy the evolving needs of shippers as they moved away from forty-foot box cars to bulk transport railcars. Pullman’s PS-2 design evolution continued in 1966 when the “Low Side” 4427 was replaced with the “High Side” version. The 4427 “High Side” was visually distinctive with its high slope bays and center of gravity, which sped the unloading process of bulk commodities. The “High Side” 4427 included 13 exterior side posts, similar to its sister car design, the PS-2 4740, which had 16 side posts. Both designs were introduced in 1966, and 4427 “High Side” production ended in 1971 after delivery of approximately 12,000 cars.

Why did Tangent do this car, and not the XYZ ABCD covered hopper? Our answer is simple. We have a penchant for doing Pullman-Standard covered hoppers correctly. You will also note some of our paint scheme collections are in territory where decals do not even exist. And finally, for our personal modeling, we want a “family” Pullman appearance among our models, just like the prototypes. We hope you will too. Let’s talk more about these cars.

First, like many Pullman hoppers they traveled far and wide. Let’s take the TLDX Peavey cars for example, with a fleet of more than 140 cars. We have photos of these cars in original paint at the following locations and times:
– GM&O in Granite City, 1968
– Butler WI on CNW in 1970
– Pasco WA on NP in 1969
– Three Forks MT on the Milwaukee Road transcontinental mainline in 1973
– Southern CA in 1976 on either ATSF, SP, or UP
– B&O in Maryland in 1968: 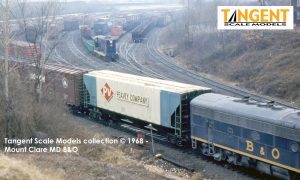 Another cool thing about these cars is that they were produced for a variety of potential services. While one series of Milwaukee Road cars were intended for grain, they were also provisioned for malt services, so they had gravity-pneumatic outlet gates underneath. Also note that this car is far from MILW rails, and instead is on one of the many railroads that plied rails in Fort Worth TX: 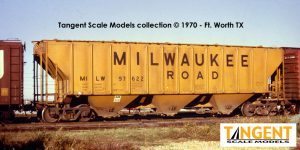 While CEI cars wandered on MP and adjoining rails, they also went East. Here is one on B&OCT in 1980.

Finally, in our quest to leave no stone unturned, here is an in service photo of a TP&W car, at 11 years old: 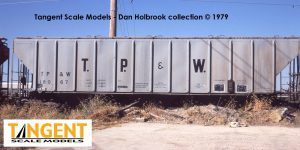 With the ATSF acquisition of TP&W in 1983, ATSF began to repaint and/or reletter the freight car fleet, or at least the cars ATSF intended to maintain leases for. Here is a very cool bandit scheme: 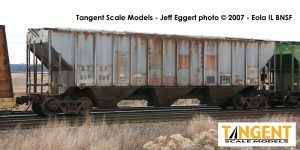 Finally, Rock Island had the second-largest fleet of this car type with 1,750 of these cars on the roster. More importantly, the 4427 high side was the largest covered hopper class on the railroad, and many of them went offline. 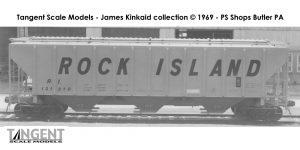 The Tangent Scale Models PS4427 “High Side” is a dimensionally-accurate replica of the real car and provides continuity with our other Pullman-Standard covered hoppers, including model design, scheme colors, and stenciling. Our model includes key build variations: stirrup steps, roof hatches, jacking pads, tow loops, discharge gates, and side air lines. This replica includes our “near-scale” draft gear box including side “key” detail. Our ready-to-operate replica is finished with coupler lift bars accompanying Kadee® scale couplers, sufficient hidden weights, and CNC-machined wheels to ensure the model operates as good as it looks.