The Pennsylvania Railroad and merger successor Penn Central built a total of 3,750 G43 / G43A / G43B / G43C gondolas at the Sam Rea Shops in Hollidaysburg PA from 1966 to 1970, the largest gondola fleet built by Sam Rea or any carbuilding shop in the 1960s. In other words, these cars are highly relevant! The G43 gondolas were a modern fleet of 100-ton mill gondolas with 52’6” interior length, with different design configurations for various customer applications. The G43 fleet was built to replace older gondolas with a rugged design suitable for mill (steel products), scrap, and aggregate services. Additionally, many were modified during the Conrail era with coil “racks” to transport uncovered steel coils. Many served NS and CSXT in the post-Conrail era in various services including coil service, as well as other revenue and MOW services. Some cars were sold to the secondary market with leasing firm reporting marks.

All of the G43 series gondolas are easily identified by their side corrugations. The similarities end there; each of the G43 sub-classes are visually distinctive from one another. The PRR G43 and early PC G43A cars have corrugations in every panel on the side of the car, and they have dreadnaught ends. 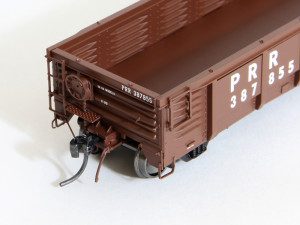 The first 600 G43 gondolas were delivered prior to the PC merger and were in PRR freight car red paint! Here is an example of a decent-looking PRR original paint car, taken during the Conrail era in 1977, offline in Ft. Worth, Texas. PC and Conrail modelers, take note, you need PRR cars! 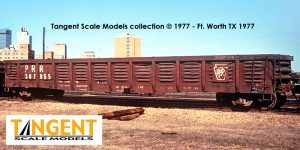 Here is another PRR car, this time out west on the Milwaukee Road’s Pacific extension on St.Paul Pass! 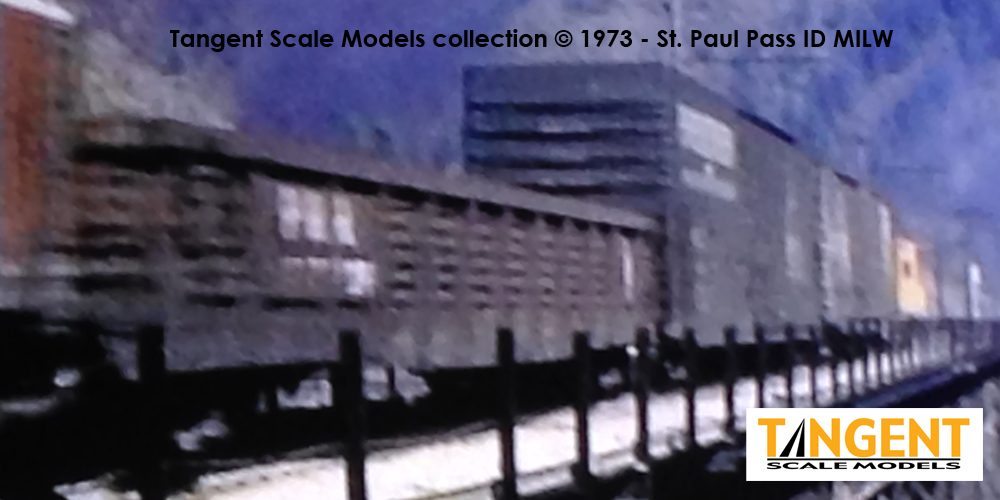 As seen above, many of the PRR-painted G43 gondolas made it into the Conrail era, and were unscathed into the 1980s. A few were even restenciled in the mid-1980s before receiving Conrail paint. 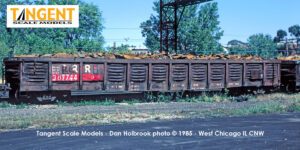 The early PC G43A cars have the same side placard layout as the PRR cars above. 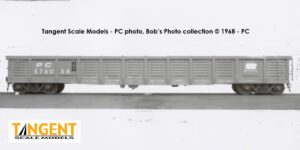 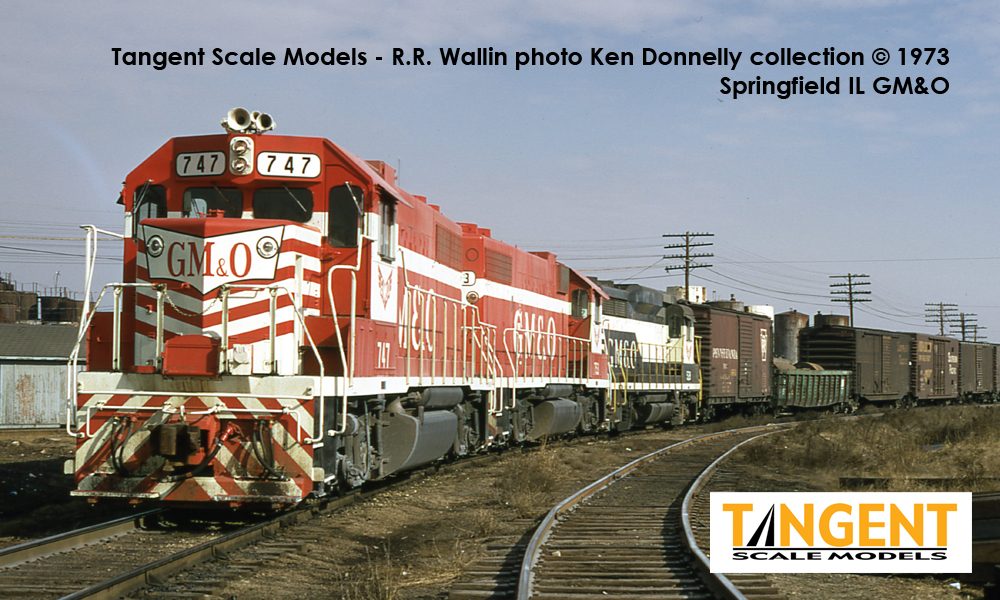 These DSI ends applied to a PRR shops car are one of the first examples of car building cooperation for the newly-formed Penn Central – cooperation between the former NYC and PRR shops. While all cars built prior to the G43B had steel floors and conventional draft gear, the G43B cars introduced wood floors and cushion draft gear. 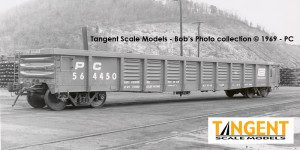 To prove how these cars are not only for PRR and PC modelers, here is an example waybill for PC 564855 from 1972 for a car loaded with sheet steel. This car originated on B&O at Bessemer PA, headed to Price Mississippi. The route NEVER touches PC rails. Instead, B&O hauls it to St.Louis where it is interchanged directly to the GM&O. The GM&O hauled it to Birmingham Southern (BHS). 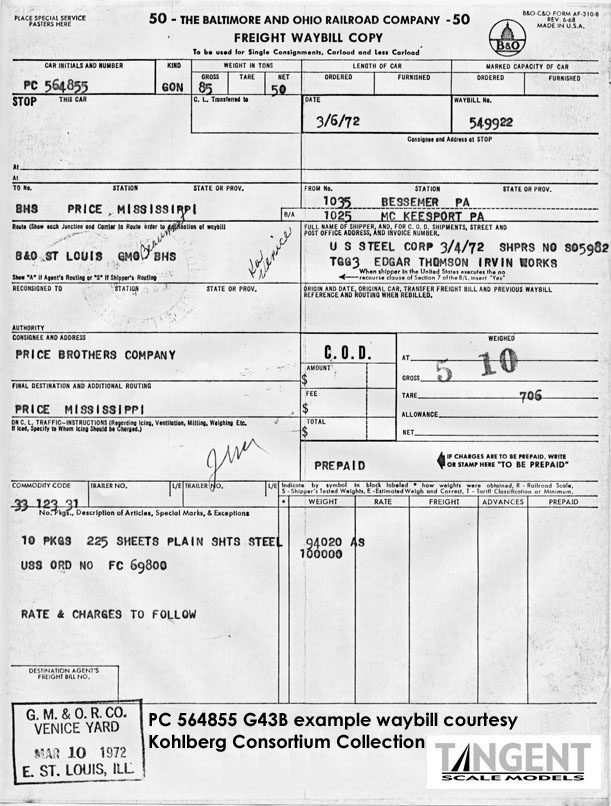 The G43C subclass, built in 1970, were the last series of cars and returned to steel floors and conventional draft gear. Note that this one is photographed in the western US – somewhere on SP/UP/ATSF perhaps. 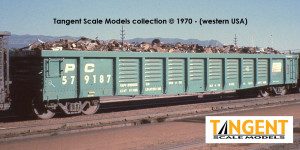 And if this isn’t crazy enough, here is a waybill for that SAME CAR, from 1972. Yup, while this was a huge fleet of 3,750 of these cars, we managed to find a photo and a waybill for the same car, albeit a few years apart. This time the car was loaded with steel plates in Coatesville PA, served by PC, and was moved to East St. Louis IL to be transferred to the TRRA. Then it was transferred to the GM&O who then moved it from East St. Louis to Tuscaloosa AL. A load of steel plates like this could have gone ANYWHERE in North America. 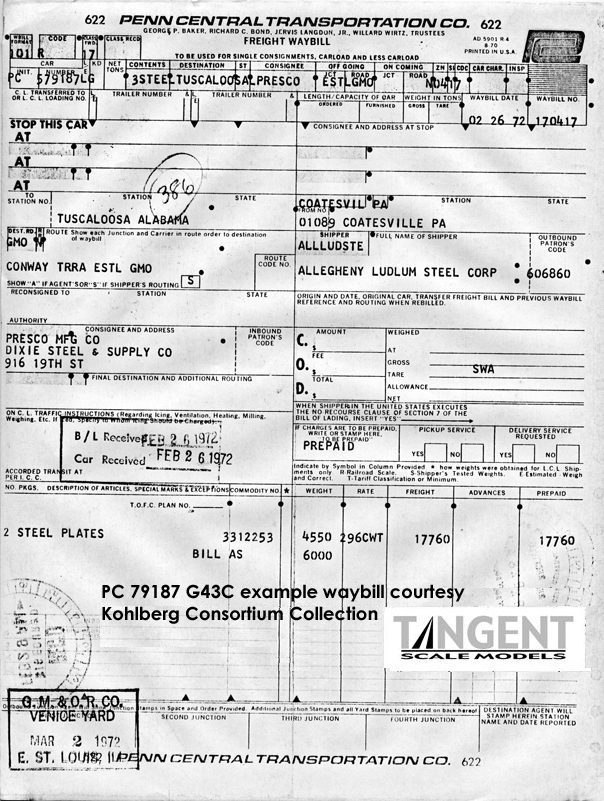 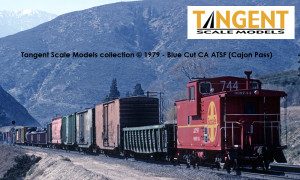 While the G43 series gondolas were not permanently configured by PRR / PC for coil steel loading when the cars were constructed, a sizable portion of the fleet was retrofitted during the Conrail era to haul rolled steel coils, easily identified by their 6XXXXX numbers. The top chord of the car has a “COIL STEEL LOADING ONLY” stencil to remind customers and railroad officers that the car is equipped with coil racks. These operated up until about the year 2020 in NS/CSX service. PRR and PC cars also hauled coils, typically using racks made from wood. 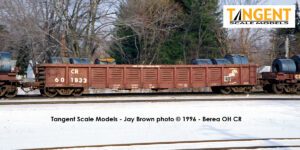 This numbering carried on into the NS years. NS classed these cars as GP44, and they were painted in the typical NS black gondola scheme in 1999, complete with the NS logo stenciling in white, placed on a large rectangular placard in the middle of the car. The top chord of the car has a “COIL STEEL LOADING ONLY” stencil to remind customers and railroad officers that the car is equipped with coil racks. 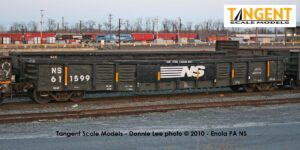 Conrail G43 series gondolas that were in non-coil service, known as “mill gons,” were numbered in the 5XXXXX numbers. Here is a G43A subclass example, photographed offline on the BN. 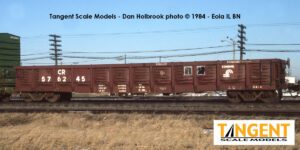 Models of the PRR/PC G43 series gondolas have NEVER been available before in plastic, brass, or resin. This is not just a single gondola model, but instead a system of gondolas. The Tangent Scale Models G43 series offering follows the prototype variations. We have produced three side configurations, two end configurations, and four floor configurations, including two with coil “racks” installed to haul steel coils (which we are also now selling as separate parts). Our G43 is perfectly scaled from actual PRR/PC drawings. We have captured the look of the side corrugations, and these models incorporate full interior detailing including the side corrugations. Finally, our cars are equipped with 100-ton trucks, “spinning” roller bearing caps, and correct CNC-machined 36” wheels to give these gons a “beefy” modern look. Our cars have a proper depth floor, and are outfitted with Kadee® scale couplers, so the cars operate as well as they look! 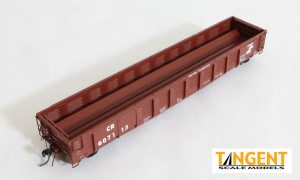 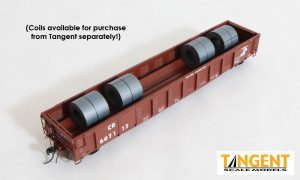 Finally, check out our correct “true-to-life” colors and “hyper-accurate” lettering including exact fonts and lettering placement.

With more than 3,750 prototypes placed into service which saw nationwide service hauling many commodities, the Tangent Scale Models HO-scale replica is a perfect addition to your layout or collection. The Tangent Scale Models PRR/PC Shops G43 Class Corrugated Side Gondola model is a state of the art, dimensionally-accurate scale replica that was tooled to Penn Central plans and verified with field measurements. Our model comes with highly accurate “true-to-life” colors and “hyper-accurate” lettering including exact stenciling, fonts, and lettering placement. Our PRR/PC Shops G43 Class Corrugated Side Gondola system of models offers three detail variations and phases to replicate the many different PRR/PC Shops offerings. A quick synopsis of our era- and railroad-specific detail variations include:
Features for our RTR replicas include: