Many household appliance brands rode the rails: Admiral, Whirlpool, or Roper, to name a few. Nicknamed “baby hi-cubes” by shippers, railfans, and rail employees alike, the PS-1 40’ “Mini-Hy Cube” boxcars were early examples of purpose-built boxcars, built by Pullman-Standard in Bessemer, AL. At 4900 cubic foot capacity, most of these distinctively small yet tall cars were purchased for appliance loading out of origins in U.S. Midwestern states. Five railroads bought these cars in 1967-1968, and they were sent to destinations all over North America delivering appliances to warehouse receivers and team tracks. Because some of the cars were pooled, any roadname could be consigned to literally any destination, making these cars “nationwide roamers,” meaning you can justify any roadname anywhere. Later in their service lives, most cars were repurposed for paper loading, and by the 1990s many remaining cars were utilized in MOW and other company service roles.

The Tangent Scale Models HO scale PS-1 “Mini-Hy Cube” Boxcar replica was designed and tooled in USA, and the plastic parts were produced in USA. It features a prototypical “slight peak” roof, separate underframe brake components with wire piping, narrow ladders and sill steps, and “see-through” crossover platforms. These replicas include the “near-scale” draft gear that has been standard on all recent Tangent releases, which includes the “side key” detail with Kadee all-metal couplers. Detailed “trombone style” coupler lift bars are also present on our replicas with one of two styles to match the prototype. Finally, the models are equipped with the correct Tangent Barber S-2-A 70-ton roller bearing trucks and 33” CNC-machined wheelsets, so our models look as good as they operate. These small yet tall models are sure to be stunners on your layout!

– BN “Cascade Green 1982” which is a repaint scheme applied to BN boxcars in 1982. These cars have a stunning repaint with the super large BN logo, Plate F logo, and other standard BN touches like white delineators (yesterday’s “conspicuity stripes”). Check out our stellar BN green! At some point during the 1980s, BN began to shift some of these cars from appliance service to paper service. Don’t miss out! These cars even have “BN” and the car number stenciled on the truck! This cool repaint scheme is available in 2 road numbers. 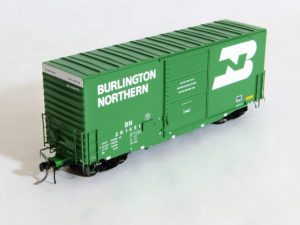 – CB&Q “Chinese Red 11-67” in original CB&Q Chinese red paint. This car is a stunner and represents CB&Q’s second delivery of these cars from Pullman-Standard. It is an all Chinese red car with no diagonal door stripe, providing some variety in the paint scheme when compared to the 10-67 delivery which included the white door stripe. The side is proudly stenciled “Hydraulic Cushioning” to draw attention to the cushioned ride the draft gear provides. These cars were built to haul appliances and lasted into the 1990s in paper service on BN and make for distinctive cars on any layout. This CB&Q series with accurate November 1967 dates is available in 4 road numbers. These cars have return route stencils to EL Marion OH (car numbers 19840 and 19848) or NYC Findlay OH (car numbers 19865 and 19869), matching the prototypes. Keep in mind the real cars were pooled, so any roadname can work on your layout! Don’t miss out!

– Milwaukee Road “Original 1968 DFB” in the classic Milwaukee Road box car red with the timeless “The Milwaukee Road” herald. Just like the prototypes, these cars have a “When Empty Return to Agent NYC Evansville Ind” stencil on the side of the car, and were assigned to Whirlpool. The cars also have the correct “DFB” stenciling applied to the door, a prototypically-accurate variation from the “DF2” stenciled cars we released previously. Keep in mind the real cars were pooled, so any roadname can work on your layout! This MILW series is available in your choice of 3 road numbers.

– Northern Pacific “Original Loewy Green 1967” in the as-delivered dark “Loewy” green scheme with the large 60” Pullman-applied Northern Pacific logo (with the red and white “ying and yang”), and the very large white “NP” with the black “shadowing” behind. Just like the prototypes, these cars have a “When Empty Return to Agent I.C. Railway Kankakee Illinois” stencil on the side of the car, and were assigned to Roper. Keep in mind the real cars were pooled, so any roadname can work on your layout! This NP series is available in your choice of 3 road numbers. 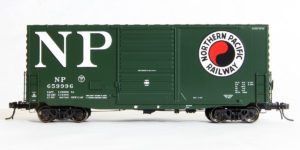 – Unpainted Kit for $36.95 each. This is a box of parts from Tangent, including trucks and wheels, so that you can build your own car to your specifications! For your home road, these cars afford significant real estate for lettering!

Even if you do not model one of these roadnames, you should consider the Tangent PS-1 appliance and paper haulers for your layout. Any roadname(s) would be perfect in a through freight or spotted at a local team tack or appliance distributor industry. Don’t miss out on the Tangent Scale Models Pullman-Standard PS-1 “Mini-Hy Cube” Boxcar, a necessary cog in the unique 1960s box car boom. Pricing for RTR models is $44.95.

That wraps up our update for today, and thank you for supporting the family-owned businesses in our industry!