In 2007, Tangent Scale Models started the trend of offering unparalleled railroad freight car replicas in HO scale, the likes of which had never been seen in the market. These highly-detailed replicas have consistently raised the bar for HO scale models with several hallmarks, including precision tooling, hyper-accurate stenciling, true to life colors, and era-specific details. Additionally, our models are designed to operate perfectly by including CNC-machined wheels, correct weights, and correct coupler heights. Simply put: We offer detailed freight cars on a higher level.

Fast forward to today’s release: the fourth release of our inaugural “Tangent quality” HO scale caboose offering. The era of “one size fits all” cabooses in HO scale plastic is over. We bring our passion and knowledge for translating real 1:1 railroad equipment from freight cars to cabooses. And we are taking things a step further, where our penchant for operations is accelerated with accurate marker lighting in era-specific versions! Our cars also have full interior lighting.

The B&O Class I-18 Bay Window Caboose fleet of “modern” bay window cabooses were delivered by International Car Co. (ICC), based in Kenton, OH. These were the first welded carbody cabooses on B&O, and they included modern features like full electrical lighting and marker lights, desks and high-back chairs, an oil heater, and roller bearing trucks. The B&O I-18 class was delivered in 1965 and 1966, with most cabooses serving through the B&O and Chessie eras. Most of the fleet survived to see service on CSX.

Our first caboose model is the B&O Class I-18 Bay Window Caboose, which was B&O’s first foray into non-railroad built cabooses. This fleet of 46 “modern” bay window cabooses were delivered by International Car Corporation (ICC), based in Kenton, OH. These were the first welded carbody cabooses on B&O, and they included modern features like full electrical lighting and marker lights, desks and high-back chairs, an oil heater, and roller bearing trucks. The B&O I-18 class was delivered in 1965 and 1966. Here is a nice broadside shot of one of them in service at Seymour IN in 1970. 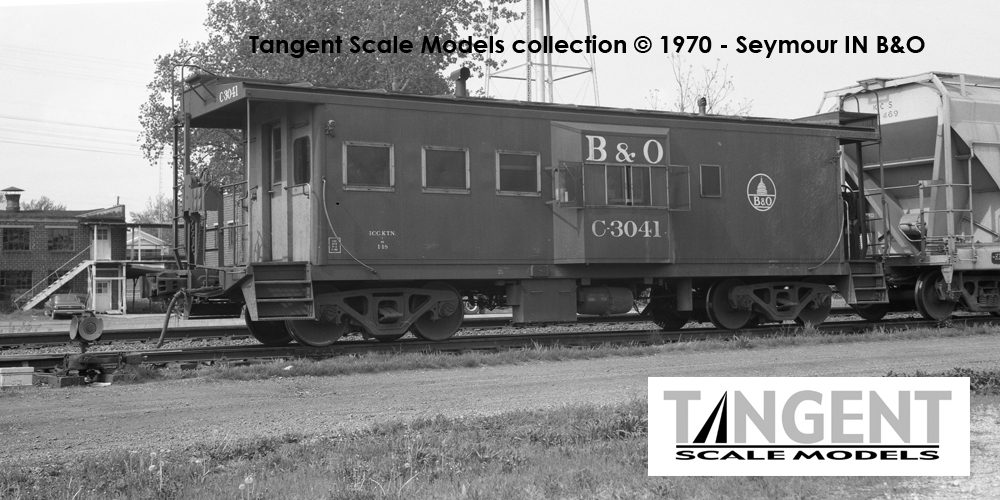 Here is one of the original paint cabooses working the rear end of a westbound road train on the B&O Pennsylvania Division, Mainline Subdivision train in 1973, about to duck under the WM mainline at Meyersdale PA. This photo is taken about 5 miles west of Sand Patch! 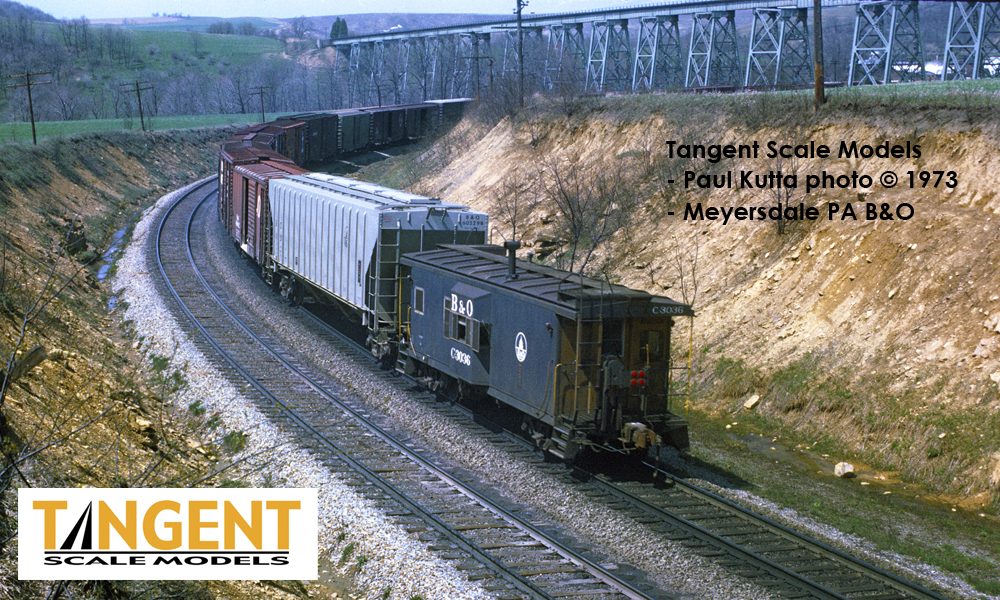 Caboose C-3013 was wrecked in October in 1967 and was repaired and repainted at the B&O DuBois Shops in January 1969. It features simplified graphics; for example note there is not a “B&O” on the bay window. Also, note the later-era capitol logo graphic. Eagle-eyed modelers will also notice the I-18A class stencil on this caboose. This duplicates exactly what DuBois did, creating a “new class” of caboose that was not officially acknowledged in most B&O documentation. 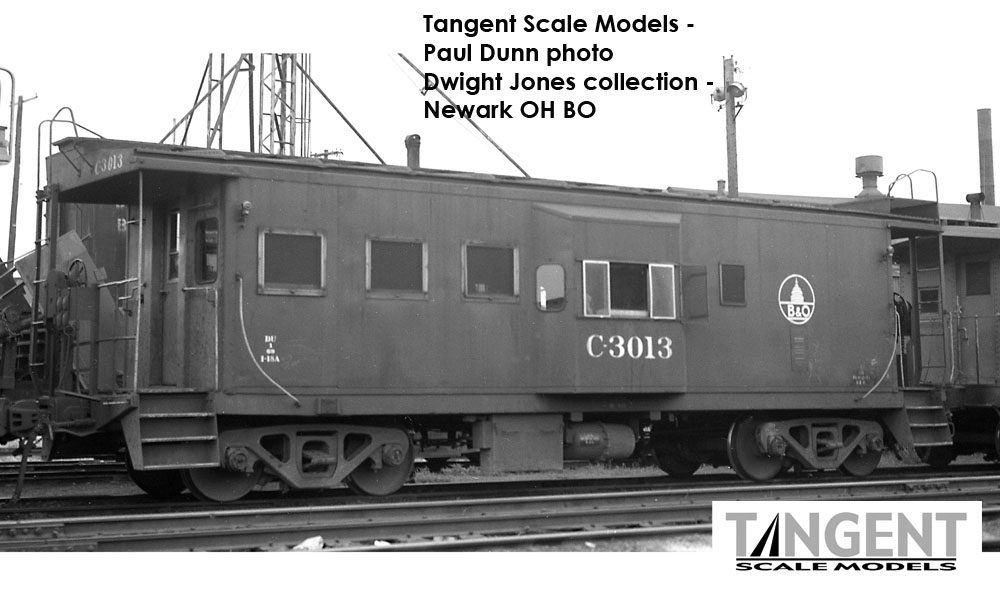 Most of the I-18 cabooses saw service through the Chessie era (Chessie called them class C-24). A majority of the fleet was shopped at B&O’s DuBois PA shops in a system program in 1973-1974. Here is a nice shot from the 1973 yellow repaint program caboose taken in 1979 just Northeast of Wilmington DE on what appears to be a MoW job consisting mostly of WM drop end Bethlehem gondolas likely in tie service (coincidentally, another Tangent freight car project) and a trusty B&O I-18 on the rear of the train. 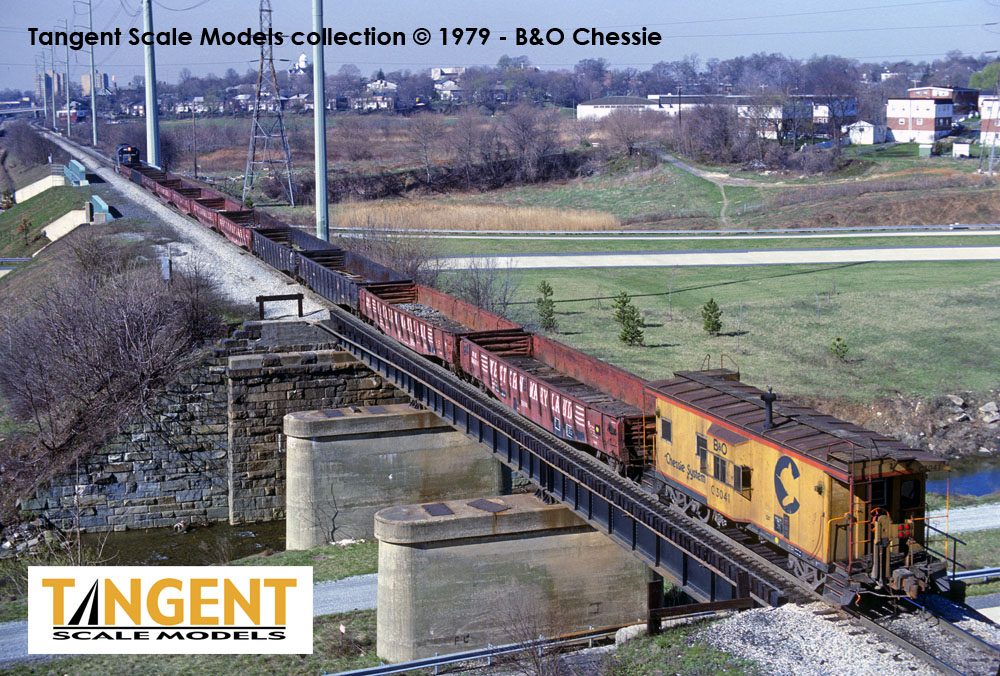 While a majority of the Chessie fleet received Chessie’s signature yellow / vermillion / blue paint, 8 of the B&O enchantment blue I-18s were repainted into safety schemes, where the I-18s represented the largest fleet of them. Perhaps the most recognizable of the B&O Safety cabooses, C-3035 was repainted by the B&O DuBois Shops with a beautiful light blue and silver combination. The caboose features the “KEEP SAFETY IN MIND ALL OF THE TIME” slogan. Note the sharp silver-painted underframe and black trucks. 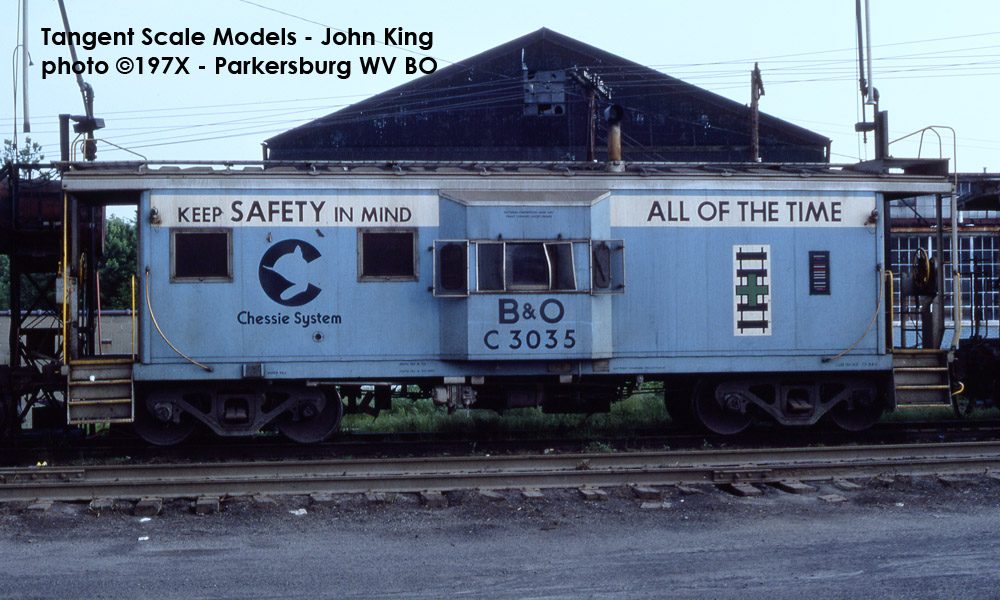 The C-3017 was repainted into a “maroon” safety scheme. Note how the safety schemes carry different slogans, as well as other varied graphics such as the Chessie safety emblem. Here is caboose C-3017 in its 1975+ form with the DuBois Shops addition of the blue toilet retention tank to the underframe, painted-out IDT stencils on the air reservoir, and era-appropriate black and white COTS. “SAFETY & SERVICE – WE WORK FOR BOTH” provides a constant reminder for employee safety. 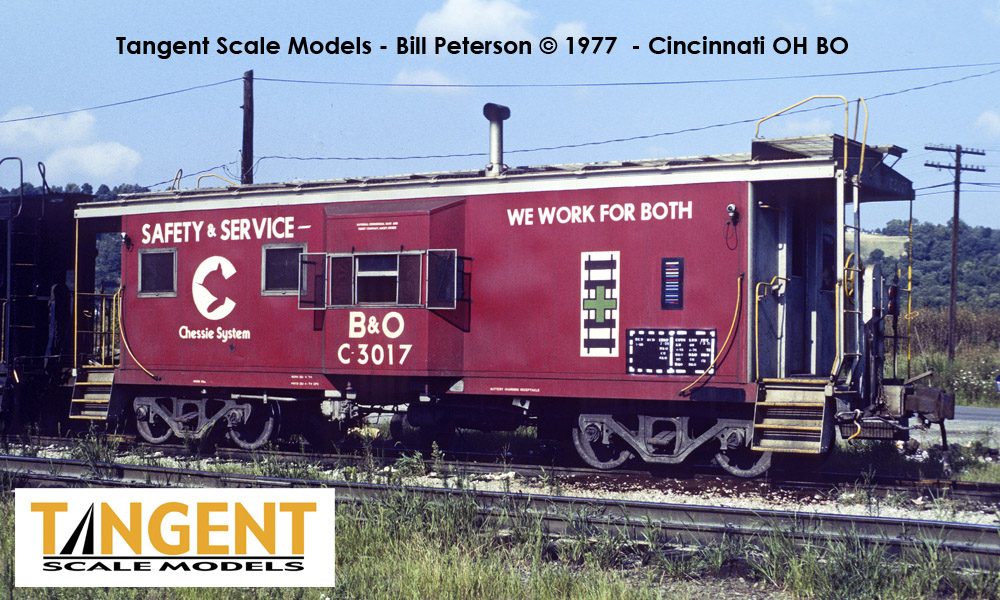 In the early 1980s, the Chessie cabooses were restenciled, and a few were repainted, with “computer system friendly” 6 digit numbers. Chessie simply added a “90” in place of the “C-“. Here is one taken in the 1980s. 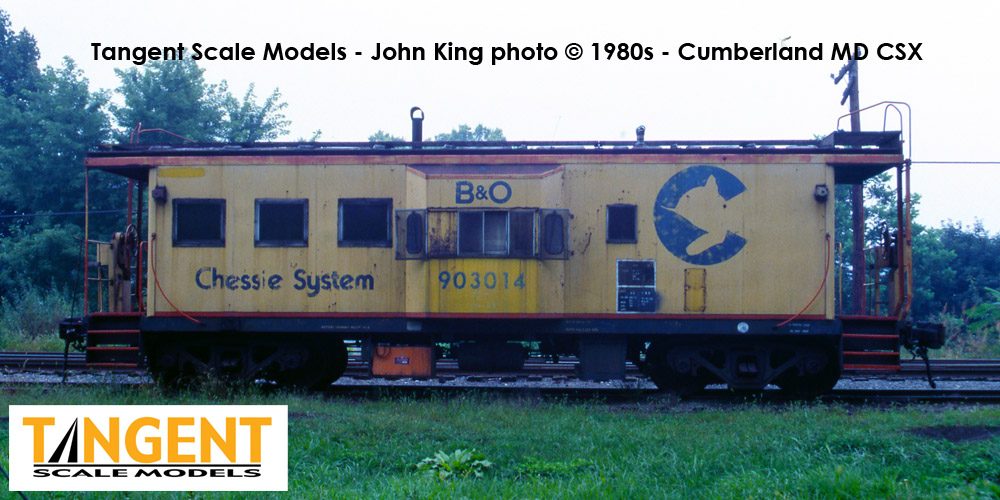 Most of the I-18 fleet survived to see life on CSX, and here is an example used as a shoving platform in Tennessee in 2018.

The I-18 fleet was in an almost constant state of change as they served the B&O. The B&O made equipment changes quickly after taking delivery in 1965 and 1966. Multiple Chessie System paint schemes, including the incredible eight “Safety Cabooses,” would start later in 1973. Exterior lighting and plumbing changes would kick in through the 1970s. The 1980s would bring more repaints, renumbering and further equipment changes. The Tangent ICC B&O I-18 replica follows many of these same paths to execute specific detail and paint combinations.

Tons more model photos – and prototype photos – can be found to the right in the “View and Buy” box. Take a look around!

Now, let’s focus on our model. The Tangent Scale Models B&O I-18 Bay Window Caboose is a state of the art, dimensionally accurate scale replica with highly accurate “true-to-life” colors and precise letter stencils. This caboose has never been offered before – in brass, resin, or plastic! Our B&O I-18 caboose was designed from meticulous field dimensions, and includes incredible levels of detail such as Waugh Cushion Underframe, brake system, battery box, toilet pipe, rooftop vents, caboose window treatments accurate for the era of the caboose, plus beautiful see-through steps, end platforms, and running board. Our field dimension work equaled two full days – to insure we got every dimension we needed to meticulously detail the real thing prior to undertaking design. Here is a shot of Tangent’s owner Dave underneath the car, taking a break from calling out measurements and photography… while getting really dirty. 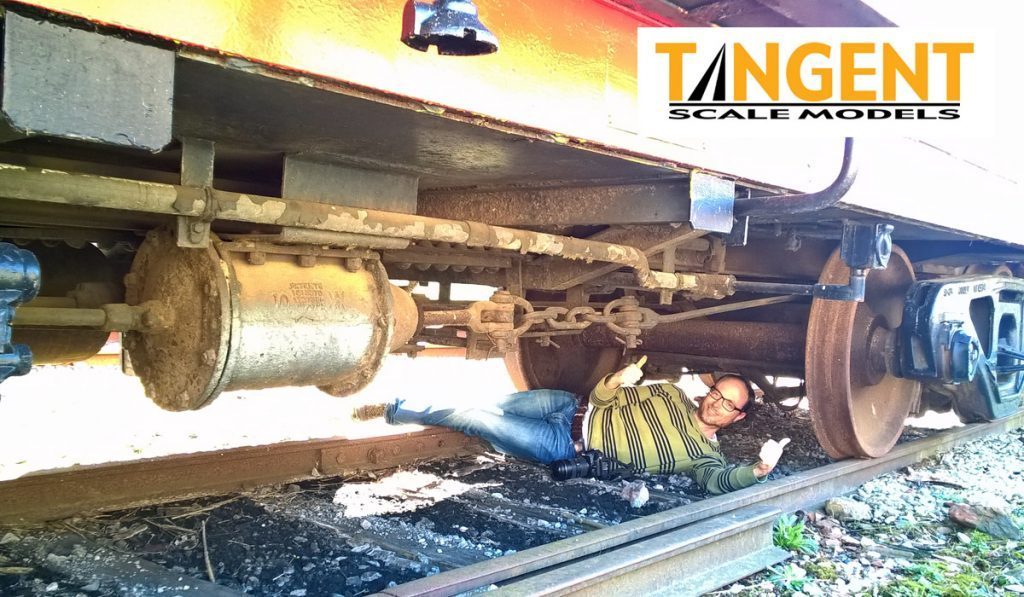 Inside the model is an accurately painted ICC-applied interior including the sink, toilet, stove, bunks, and desks. We documented the prototype interior thoroughly, including dimensions, colors, and the history of the changes inside. 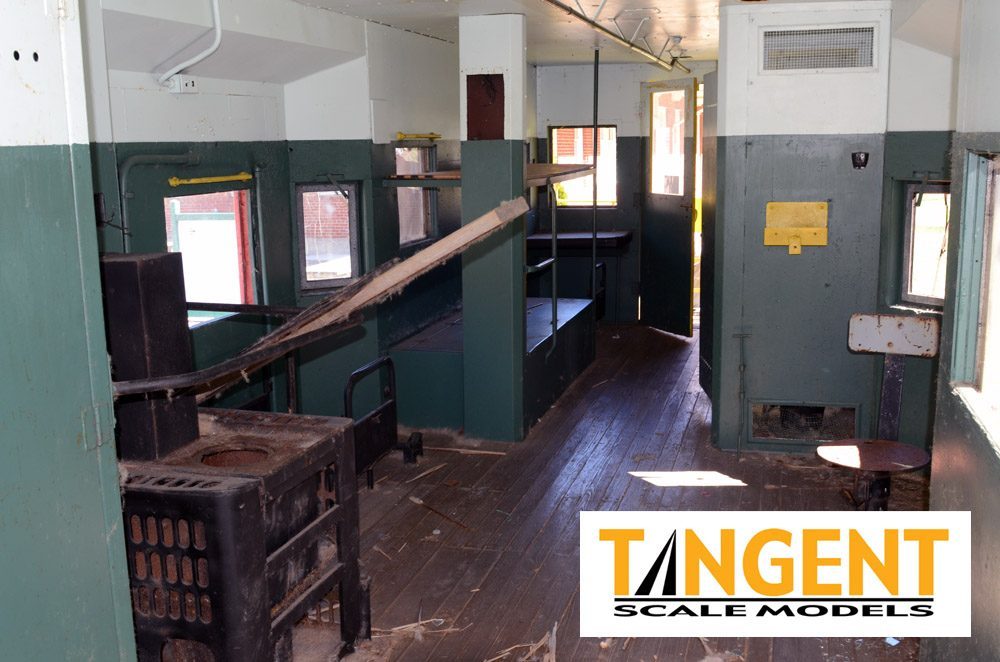 The results of our efforts were then translated to our model. Every one of our models has this complete interior, although it is difficult to see it through the windows! Here is the interior of our caboose with the body shell removed (we do not recommend this and it will void the warranty for the caboose due to the complexity of the marker lighting system). 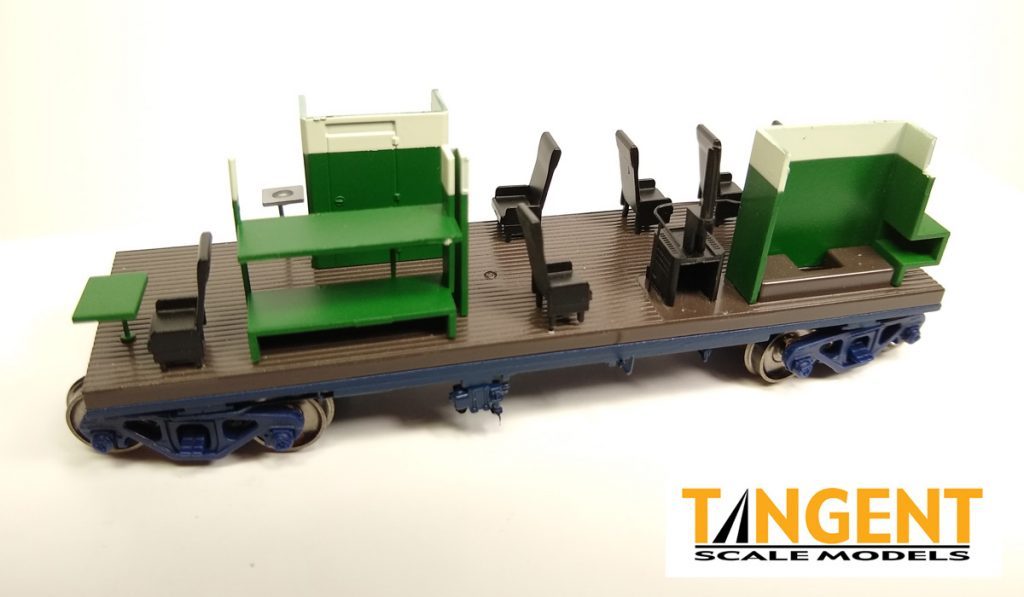 Our caboose includes interior lighting, plus working (lit… see below) marker light options that are appropriate for the RTR paint scheme offered. Here is the model with Pyle lanterns.

Starting in 1979, Chessie began to remove the Pyle lanterns and replace them with these square light housings.

Also in 1979, Chessie added the round red FRA light (i.e. a flashing red light) that people remember fondly from what became the last gasp of the caboose era in US railroading.

We offer “no fuss” track-powered exterior marker lights as appropriate for the prototype, and our cabooses are compatible with DC or DCC setups right out of the box (a simple wand included in the box activates the lights on each end – and the interior – independently). Finally, our ready-to-operate replica includes “near-scale” draft gear box including side “key” detail, coupler lift bars accompanying Kadee® scale couplers, sufficient hidden weights, and CNC-machined wheels to ensure the model operates as good as it looks.

These cabooses are shipping today! More model photos – and prototype photos – can be found to the right in the “View and Buy” box.

Don’t miss out on the Tangent Scale Models B&O I-18 Bay Window Caboose, our first release in the Tangent caboose line.

And if you are still reading and wondering “will Tangent do more cabooses” – the answer is yes. But we won’t say what or when since we need to sell this one first! Thank you for your interest in Tangent Scale Models! 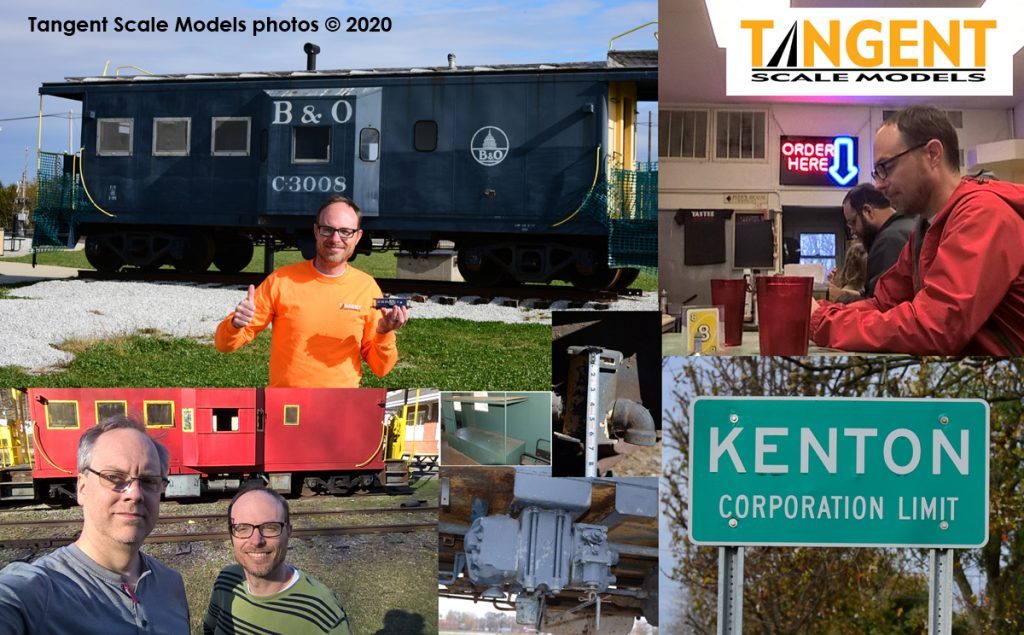