Gunderson Brothers Engineering Corporation of Portland OR was a small carbuilder that mostly produced box cars. While the company dates to the World War II era, the first significant box car production was started in the later 1960s. Built in 1968-1969, the 6089 cubic foot double plug door model was the first of its kind for Gunderson Brothers: the first 50’6” high cube boxcar. Gunderson Brothers continued the carbuilding trends of the 1960s, utilizing commercial components like Stanray dreadnaught ends, Stanray peaked roofs, and Hydra-Cushion center sills. These centered double-plug door box cars were purpose-built for paper, appliance, and other large products loading with easy access for forklifts, and they wandered all over North America during their service lives. With 1,050 cars produced in total, three railroads originally purchased these cars: SSW, SP, and DRGW. The SP and SSW cars were repainted in the 1980s/1990s and served into the 2000s.

Our July 2022 production includes four total livery schemes, plus an Undecorated kit option. Model photos can be seen by clicking at right.

– Southern Pacific (SP) “B-70-43 Delivery 1969” shows off the classic, as-delivered SP paint and lettering. From the accurate SP red with that eye-catching yellow left hand door, to the subtle roof overspray, these cars hauled paper for the SP to all corners of the North American rail empire. SP loved to advertise their boxcar features, as seen here with the “Hydra-Cushion For Fragile Freight” graphics on the side of the car. All of that beautiful SP data is also present – every single element — From the big bold “Southern Pacific” down to the most intricate and finely printed FMC Gunderson Bros. builder stencil. The SP 1969 Delivery scheme also featured Morton crossover platforms, an Ajax brake housing and a Modern brakewheel. The prototype SP cars were fitted with “Birdsboro foundry” 70-ton trucks and Hyatt roller bearings. Tangent is offering HO scale replicas with your choice of 12 numbers that match these beauties. Click images at the right to see pricing, SKUs, high resolution photos, prototype photos, car number options, and/or to order!

Here are two SP cars rocking and rolling on the Tehachapi Loop in 1980! 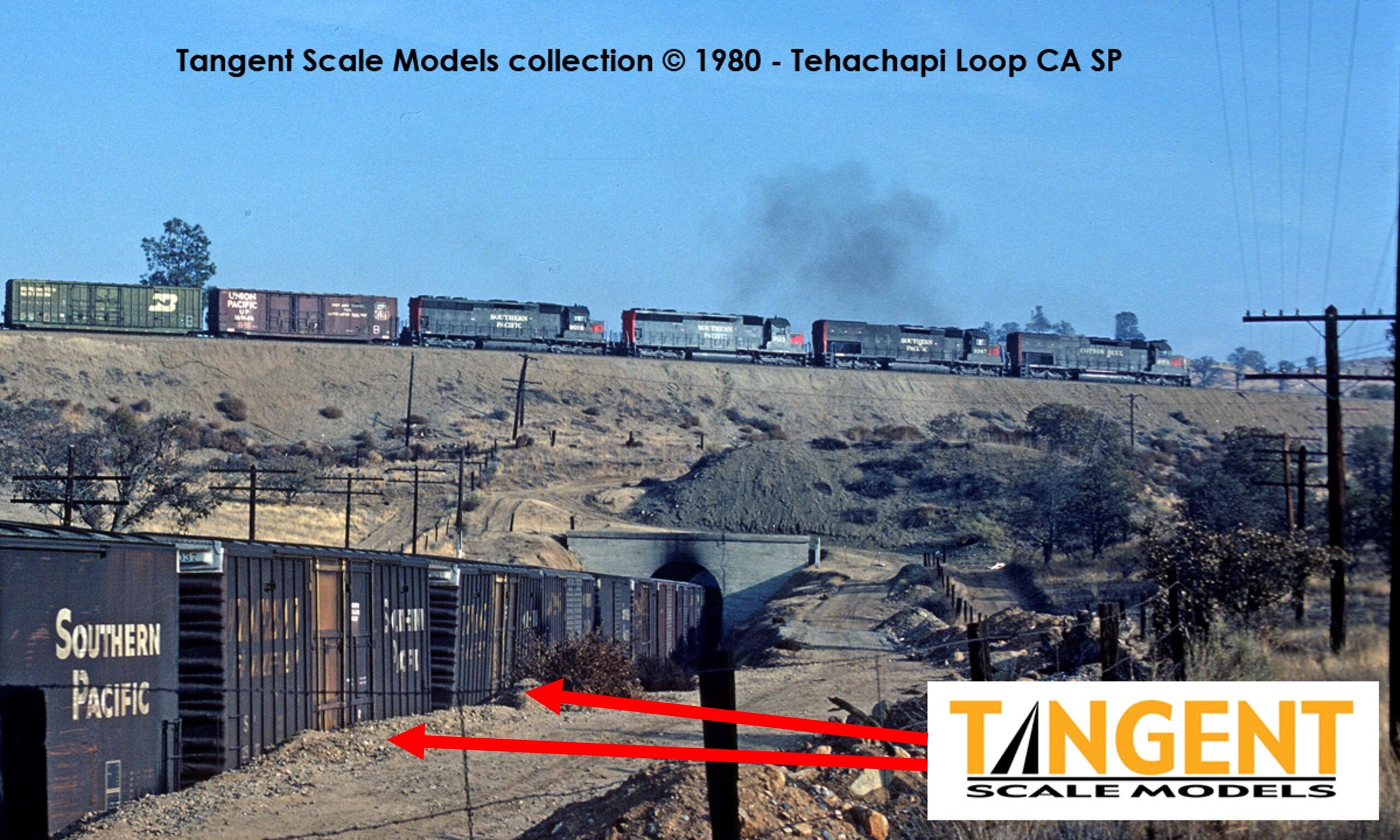 – St. Louis Southwestern (SSW) “Cotton Belt” B-70-42 Repaint 1984+ pictured here is a 1984-era repaint scheme. In 1984, the SP/SSW was busy renumbering some of the SSW’s B-70-42 boxcars into the 59000 series. Their new paint jobs stood out with a smaller but distinctive yellow “CUSHION-CAR” graphic on the left with the familiar “COTTON BELT” bold graphics to the right. Sharp-eyed fans will note the sans-serif reporting marks and data – this is accurate for this era of SSW B-70-42 repaints. Like the SP cars pictured above, the Cotton Belt cars also had Morton crossover platforms and an Ajax handbrake. These cars were retrofitted with “3rd Arm” door hardware along the top door tracks. These cars came delivered on 70-ton “Birdsboro foundry” Barber S-2 trucks with “Timken” roller bearing caps. Tangent is offering HO scale replicas with your choice of 12 numbers that match these beauties. Click images at the right to see pricing, SKUs, high resolution photos, prototype photos, car number options, and/or to order!

– Denver & Rio Grande (D&RGW) “Delivery 1969” Gunderson box cars were delivered with the distinctive D&RGW “Grande Gold” paint coupled with black ends with roof overspray. The prototype “Rio Grande” graphics were carefully fitted to the available 7 panels of space to the right of the doors. The white paint at the tops of the ends reminds you that this is a “high-cube” car. The Rio Grande cars feature truck mounted brake details and no body-mounted brake cylinder on the Hydra-Cushion underframe. The D&RGW cars also featured accurate “unpainted” Morton style crossover platforms, early “5-board” large tack boards on the sides and ends and an Ajax handbrake. The 70-ton “Birdsboro foundry” Barber S-2 trucks rode on Hyatt roller bearings. Tangent is offering HO scale replicas with your choice of 12 numbers that match these beauties. 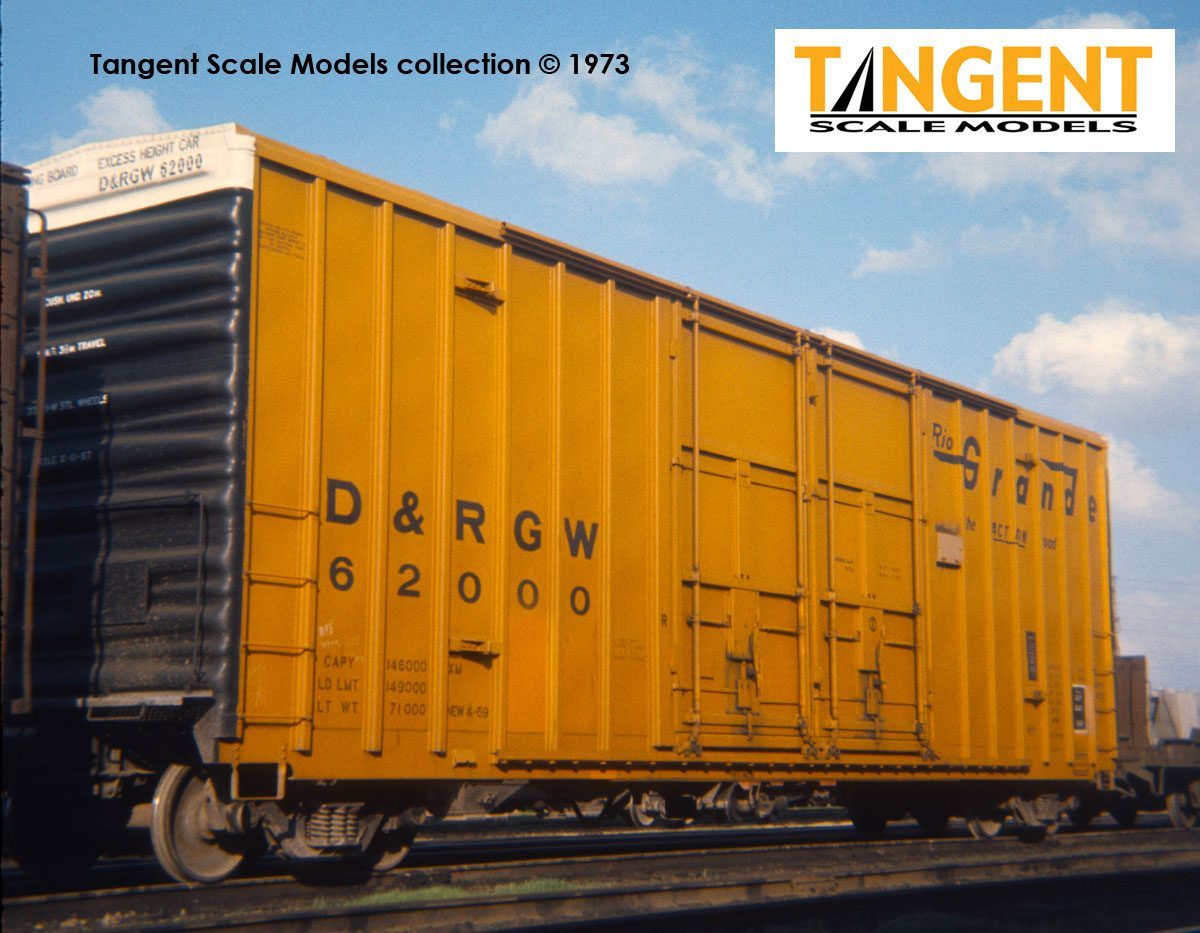 – GVSR “B-70-43 Repaint 1996+” illustrates that oh-so-90s look of the “Golden West Service” paint scheme. Starting in 1996, SP sold some groups of the SP and SSW B-70-42 cars to Greenbrier Leasing, who then refurbished the cars and leased them back to the SP through the GVSR. Painted dark blue, these cars went right back to work on the SP for many years. This model features lots of fine small door data and labels, carefully reproduced to add even more pop to those beautiful double plug doors. The separate door tracks and “3rd Arm” details really stand out! We also applied “replacement” style tack boards on the sides and ends to duplicate the prototype after refurbishing. The Tangent GVSR model is equipped with accurate black 70-ton “Birdsboro foundry” Barber S-2 trucks that have rotating “Timken” roller bearing caps. This GVSR offering is available in 12 numbers. Tangent is offering HO scale replicas with your choice of 12 numbers that match these beauties. 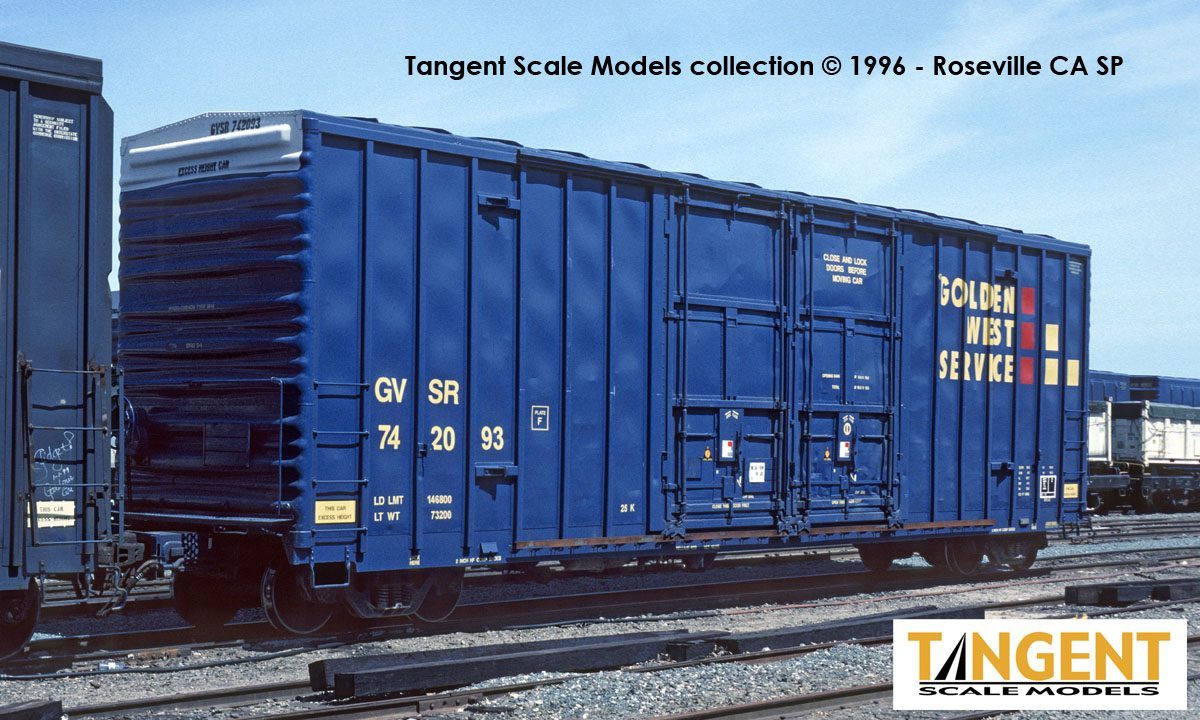 Details and photos for all of these models can be seen by clicking on the images at right! Note that we also offer Undecorated kits!

Don’t miss out on the Tangent Scale Models Gunderson Brothers 50’ 6089cf High Cube Double Plug Door Box Car, one of the most memorable freight car designs of the late 1960s! Pricing for RTR models is $56.95, with quantity discounts for direct purchases from Tangent Scale Models.

Click the paint schemes in the grid at right to view more photos and buy!