Our first image shows off the “group of 6” NEW schemes for our October 2021 production. Please note we also have a rerun of Southern Pacific 1969 (with new numbers) available. Please click on the images at right for pricing, SKUs, high resolution photos, prototype photos, car number options, and to order!

During the 1960s, the most radical freight car designs employed the extreme height clearances offered by Plate F car designs. In 1964, no car type articulated this extreme more than the 86-foot, purpose-built “Auto Parts” boxcars. These large boxcars became fixtures on the rails all over North American mainlines, riding hot trains to deliver components vital to the productivity of auto plants. While several car builders offered 86’ auto parts boxcars, the most prolific builder of the double plug door design was Greenville Steel Car Company of Greenville PA. More than 4,400 of these cars were acquired by most major railroads, and they were assigned to pools where multiple railroad’s cars served a specific shipper or shippers. Original utilization of these cars was for Ford, Pontiac, and Chrysler, as well as deliveries from 3rd party parts suppliers to the auto plants. Greenville’s 1964-1978 production was the longest run for this car type, with many still in service today.

More about the model in a moment – let’s start with the prototype! Here is an example of a 1969-built Greenville 86’ High Cube Double Plug Door Box Car right after delivery, in Union Pacific paint! UP ordered two different lots of Greenville auto parts box cars, and this lot was the earlier of the two orders. The prototypes were delivered with very large UP 1960s stencils – the largest “Union Pacific Railroad” logo you will ever see, plus the largest “automated rail way” and “Cushioned Load” map logo that represented Greenville’s adaptation of the original Union Pacific plans. UP had a stencil that explicitly says “Auto Parts” on the side. Return stencils are of course present on these cars: “When empty return to GTW RR Pontiac MICH.” The underframe features accurate End-of-Car Cushioning details and this UP replica rides on accurate 100-Ton “Low Profile” Barber S-2-C Roller Bearing Trucks with 36” wheels, rotating “Hyatt” caps and truck mounted brake details. 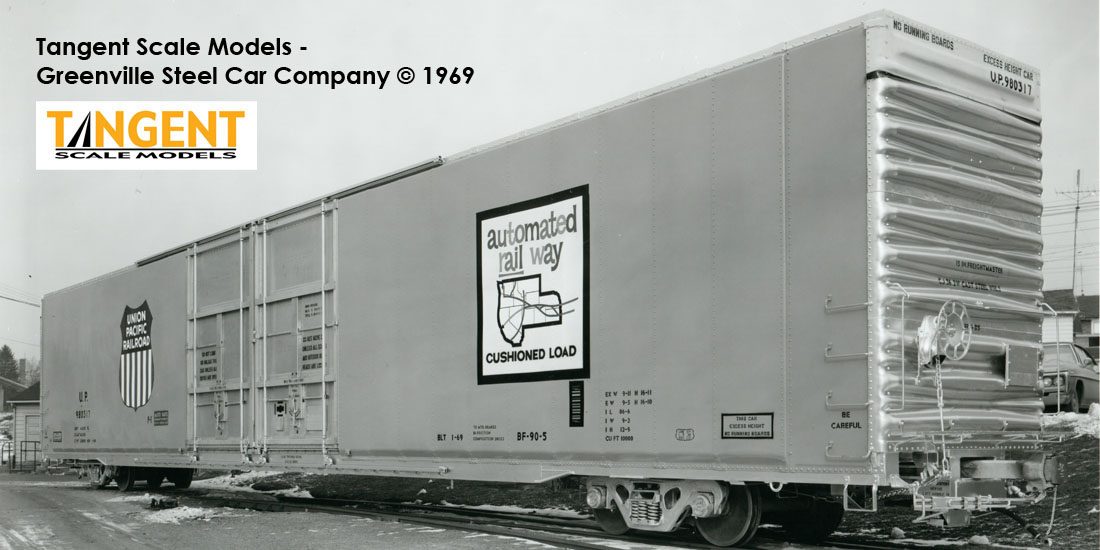 The first Greenville cars were built in 1964 and featured rooftop running boards (“roofwalks”) which were removed during the year 1965. Here is an example of a PRR prototype car modified in 1965, with the removal of the roof running board, the lowering of the brakewheel housing and removal of high grab irons and end ladders. If you look closely, you can see all of these “remnants” on the sides and ends of the prototype. The roof features the old bolt locations of the running board supports! PRR purchased a large group of 145 cars prior to the PC merger. Painted in the characteristic PRR freight car red colors with large PRR keystone and gold “Cushioned Load” stenciling, these cars were seen widely. 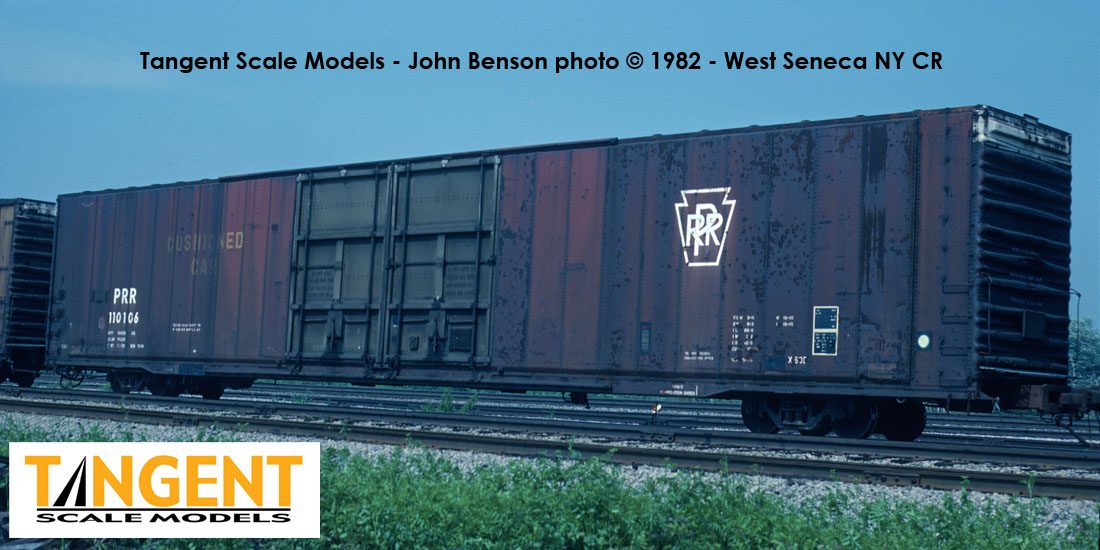 This Conrail (CR) Ex-PRR X60C Patch 1976+ can trace its heritage back to the 1964-built PRR X60C class shown above. It represents one of the former PRR-painted cars that has been quickly “banditized” with Conrail reporting marks and road numbers, a common practice in the early years of Conrail. These banditized stencils were applied to only a subset of the car fleet, and they always make very interesting models and weathering projects. These cars feature the “remnants” of the grab irons on the sides and ends of the model, as well as the roof details of a car that had a running-board at one time. 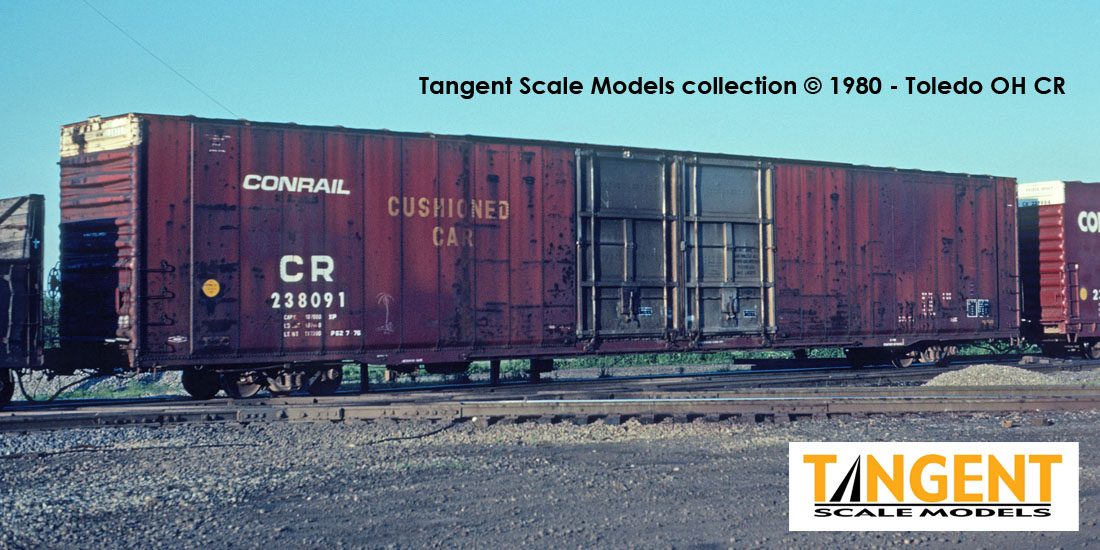 With a tremendous amount of surface area to paint on these cars, some railroads elected to paint the cars with significant, complex stenciling. offers one of the most iconic railroad logos so frequently seen on freight cars over the decades: the Santa Fe “circle-cross.” This car has the largest one you will ever see on an HO scale freight car! This group of cars represents Santa Fe’s BX-106 class, their second order of Greenville cars. These cars stand out with the large “Super Shock Control” and “Auto Parts” lettering and all of that beautiful fine ATSF car data. Don’t forget the six really neat small Santa Fe “circle cross” logos on the bottom of the car that act as delinators! This 1965-built Greenville car features accurate Apex style crossover platforms, an Elcon-National hand brake housing and accurate Center-of-Car Cushioning details with truck mounted brake hardware. Check out those 70-Ton Barber S-2A Roller Bearing Trucks, with 33” wheels and accurate “Hyatt” roller bearing caps. This car was photographed on the SLSF in St. Louis. 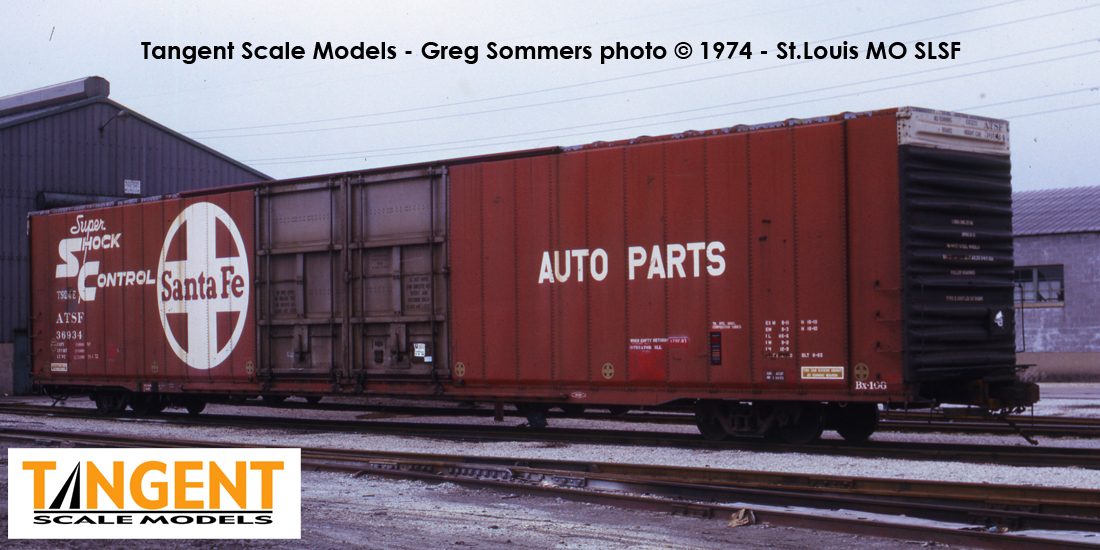 Another eye-catching scheme was found on the Illinois Central Gulf cars. ICG had three distinct orders of Greenville double-door boxcars, and this group represents the 1977 delivery cars, the second of the three orders. The 1977 cars have body-mounted brake gear and End-of-Car Cushioning components. These stunning orange replicas include a 10-foot I-ball logo, large Illinois Central Gulf lettering, plus white “Cushion Car” stenciling. These cars are a little different from some of the more traditional auto parts cars, as their return route stenciling directs them to “ICG RR, Centralia Illinois” – an artwork detail that we replicate faithfully! Fun fact: Centralia, Illinois was home to Rockwell International, a manufacturer of fiberglass automotive and truck parts.

N&W was the largest original purchaser of Greenville 86’ auto parts boxcars from multiple eras, and these cars literally went everywhere. This Norfolk Southern (NW) B20 Repaint cars were painted in NS brown paint in 1989 complete with the NS logo stenciling in white. This 1965-built Greenville group features Center-of-Car Cushioning details, a Hydra-Cushion cylinder and truck mounted brake hardware. The B20 class rides on 70-Ton Barber S-2A Roller Bearing Trucks, with 33” wheels and accurate rotating “Timken” roller bearing caps. As a reminder, These beauties are available with six road numbers! 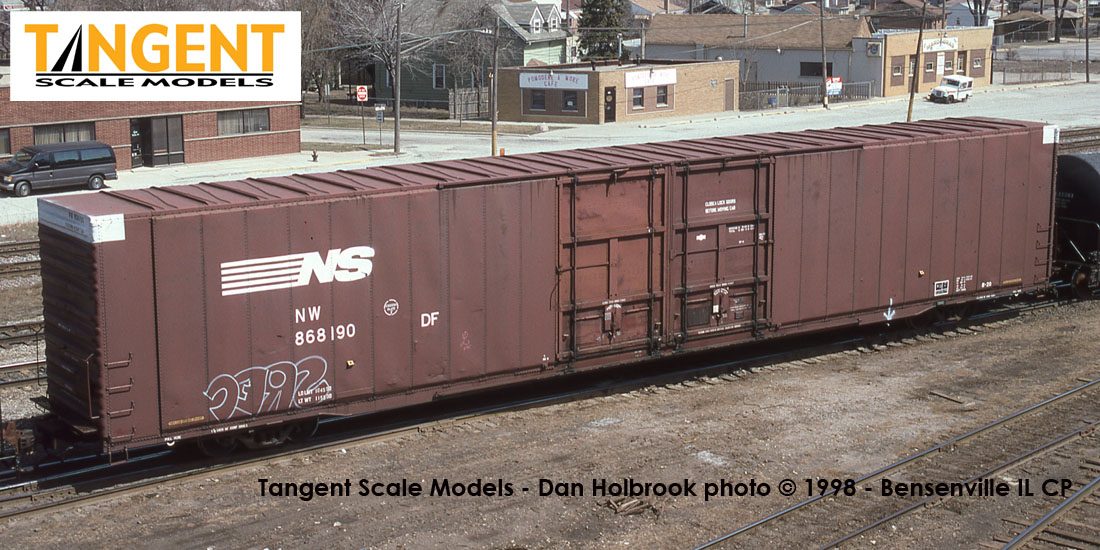 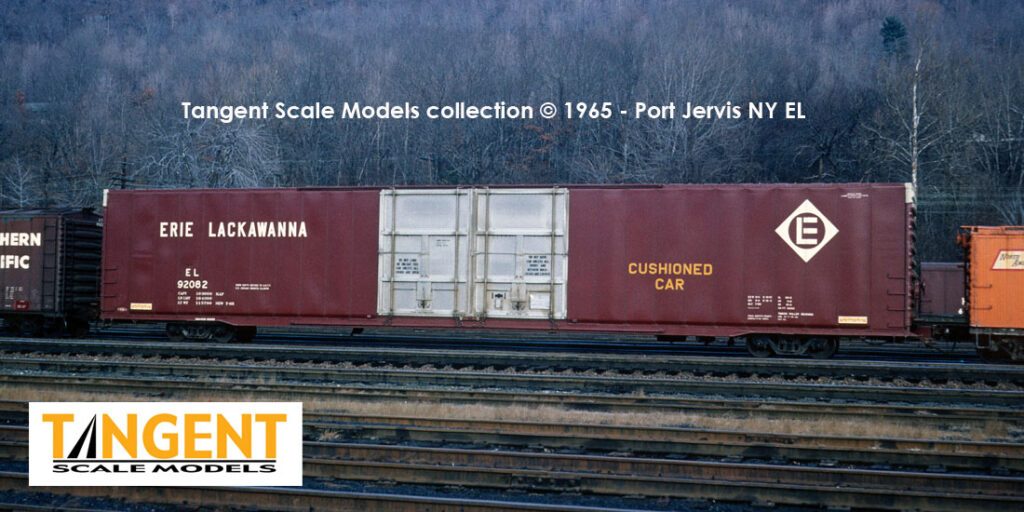 Missouri Pacific (MP) was also a prolific buyer of Greenville auto parts box cars! MP ordered five different lots of Greenville auto parts box cars, and this lot was the largest at 157 units. The prototypes were delivered with MP “buzzsaw” logos on the right side of the car, and economical “Cushion Car” lettering on the left. The cars offered in this run were assigned to Ford’s Chicago Stamping Pool, resulting in an accurate Chicago Heights, Illinois return route stencil. These cars lasted in original paint into the late 1980s and went everywhere. 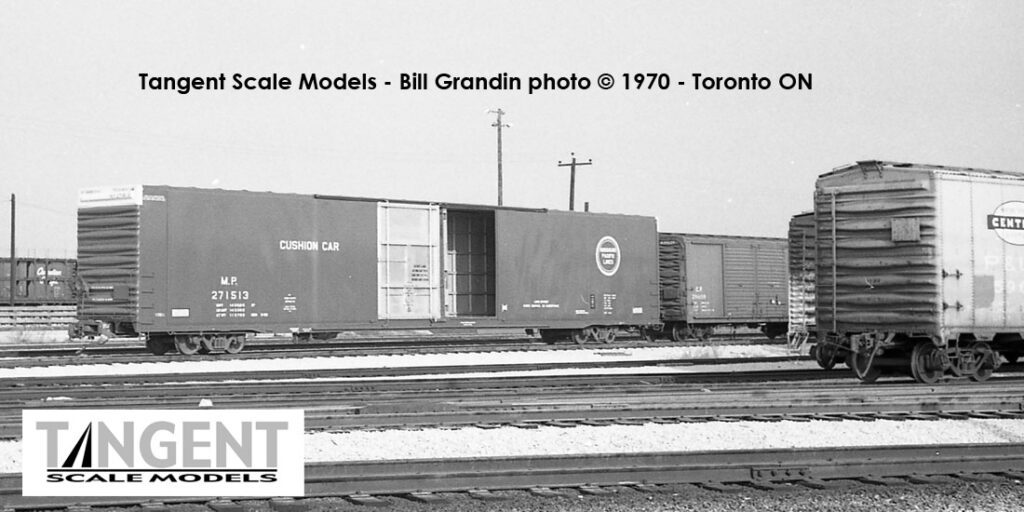 Another eye-catching scheme was found on the pre-BN Burlington Route cars. CB&Q was the only Hill Line railroad to take delivery of auto parts cars, and this release represents the first of CB&Q’s two orders of Greenville prototypes. Delivered in 1969 when the BN merger plan called for green car deliveries, these cars had their pre-merger paint scheme, complete with large “Burlington” lettering. For return route stenciling, these cars state “When Empty Return To GTW RR Pontiac MICH” on the side. For additional context for how far and wide these cars traveled, these cars served into Canada. The car side has one and a half inch stenciling stating “This Car Too High To Clear St. Clair Tunnel Port Huron Michigan.” This warning lettering varied from car to car, and we have duplicated this with car-number specific and car-side specific placement of St. Clair tunnel stenciling! 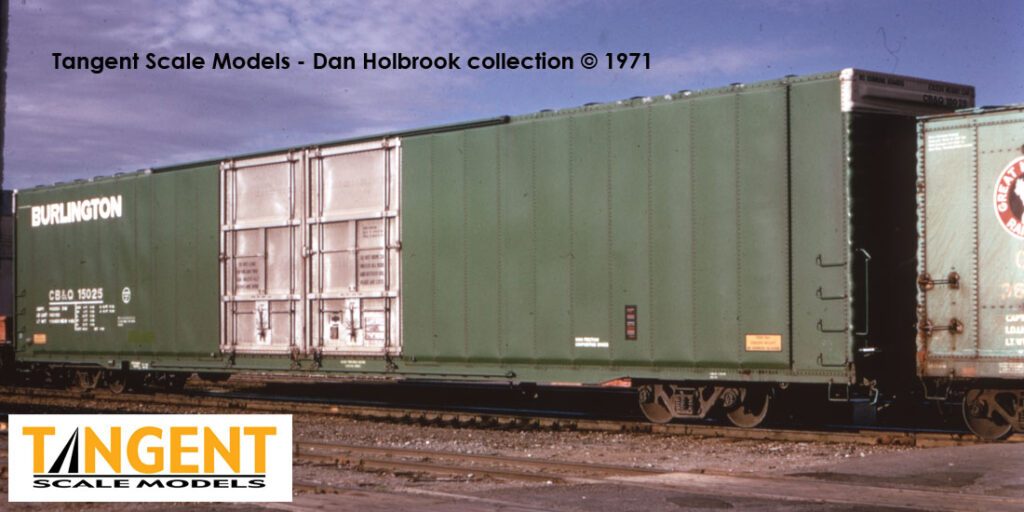 Here is an example of a 1969-built Greenville 86’ High Cube Double Plug Door Box Car right after delivery, in Baltimore & Ohio paint! This car is from the first Baltimore & Ohio order of Greenville 86’ Double-Door box cars. Representing B&O’s first order of cars, which were initially assigned to Pontiac service, these cars also include the glorious yellow “script” “Cushion Underframe” stenciling so commonly found on the railroad’s pre-Chessie boxcars. All of that beautiful B&O car data is present, from the intricate “Cushion Underframe” script to the tiniest “Freightmaster” branded cushioning badge on the end of the car. This 1969-built Greenville car features Apex style crossover platforms and a Universal hand brake housing. Check out those 100-Ton “Low Profile” Barber S-2-C Roller Bearing Trucks, with 36” wheels and Timken rotating caps. 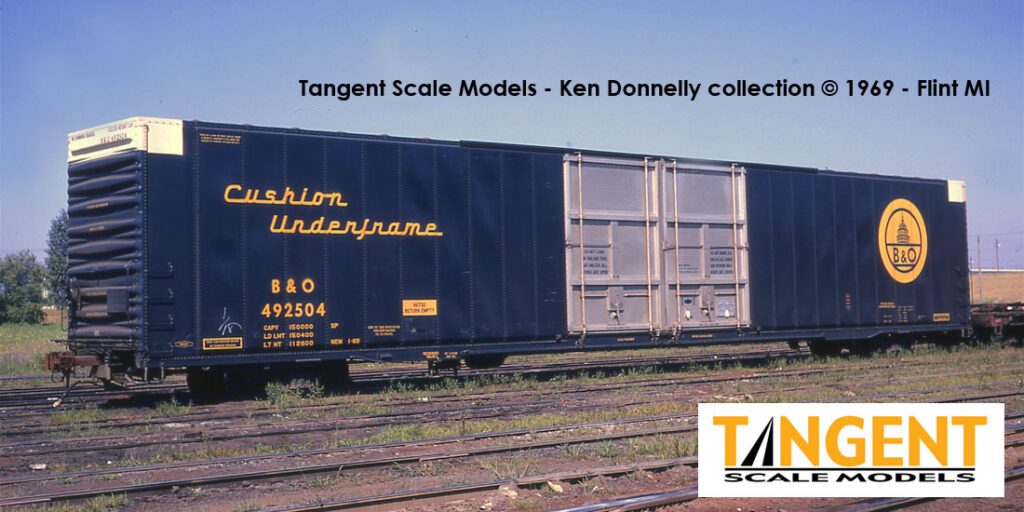 The Penn Central (PC) auto parts cars were certainly memorable when it came to stencil lettering and the large worms adorned on the side of the car. The 1968 PC green paint looks sharp, with the contrasting aluminum doors. These Greenville-painted original PC cars were classed as X-60M, and were built in October 1968. The “When Empty Return to” stenciling is to Chicago Heights IL, again representing the service to/from the Ford Chicago Stamping Plant. PC-distinctive details stand out on this replica, including a gorgeous Peacock 850 hand brake and Morton crossover platforms. This PC car was photographed in Toronto on CN. 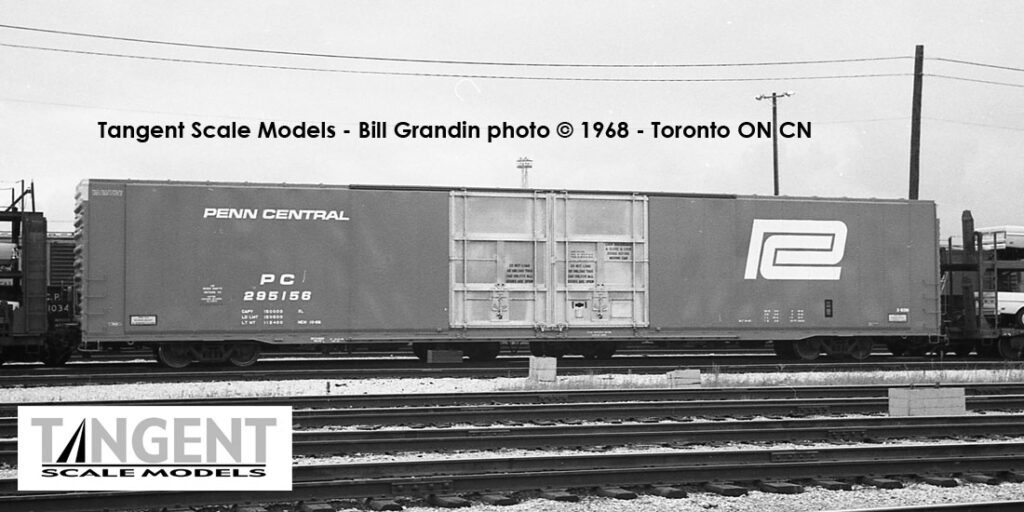 Keep in mind that these were pooled boxcars which means you might consider buying cars in a variety of road names. Again, the pools for these cars mean that the cars were roamers – don’t just look for cars from “your” railroad!

Here is an example of a 1969 photo from Buffalo, showing some of the wonderful roadname variety mentioned here, including PRR, L&N, NYC, ATSF, CBQ, NW, CBQ, CNW, and UP, all in one photo! 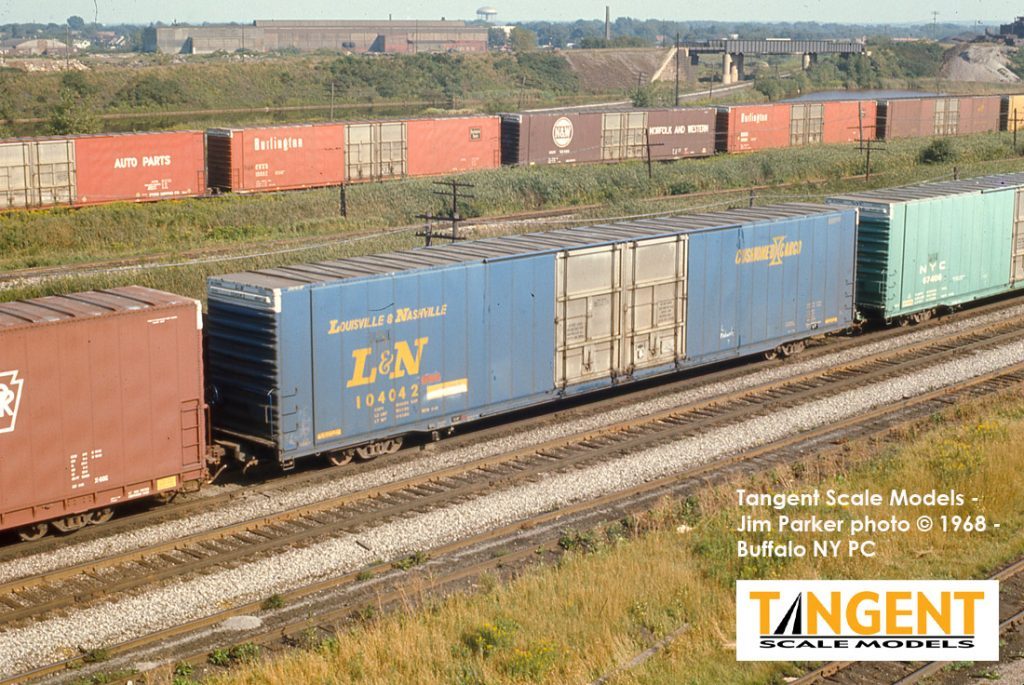 Our focus today is with the double plug door box cars from Greenville. The “other” 86′ Greenville auto parts cars – the quad door cars (four doors visible on one side) – represented 8% of the overall Greenville Steel Car production. We have more body variations in progress, including the quad-door cars for GM and Oldsmobile service (original assignments which changed with time) as well as other double-door variants!

Now, for the models! The Tangent Scale Models Greenville 86′ Double Plug Door Box Car system continues the design and operational standards set by previous models in the Tangent product line. Our product builds up to seven major build variations (yes SEVEN, you read that right), including three specific body variations, four different brake layouts (two brake systems), five different draft gear combinations, and three underframe styles which incorporate Center-of-Car Cushioning and End-Of-Car Cushioning options. The Tangent Greenville 86’ box car includes a 70-ton or 100-ton truck option, with selections appropriate for each paint scheme, and both include “spinning” roller bearing caps. Finally, our cars are weighted properly and come with Kadee® couplers mounted in specially-designed coupler pockets which means they operate as good as they look. Due to the car’s size, we recommend curves of 24” or larger for these models.

Click the paint schemes in the grid at right to view more model photos and buy!

The Tangent Greenville 86’ High Cube Double Plug Door Box Car system is a state of the art, dimensionally-accurate scale replica that was tooled to Greenville Steel Car plans and verified with field measurements. Our model comes with highly accurate “true-to-life” colors and “hyper-accurate” lettering including exact stenciling, fonts, and lettering placement. Our Greenville 86’ system of models offers a multitude of detail variations and phases to replicate the many different Greenville Steel Car offerings. A quick synopsis of our era and railroad-specific detail variations include:

These all-new truck options are systems of their own! They include your choice of 3 different “rotating” roller bearing caps and 3 different wheel options. Each truck also has the option of two separate brake beam parts, either for body-mounted brake systems (which are our standard offering), or for truck-mounted brake systems (available as a swap-in part). Our trucks and parts are available separately, and our RTR-cars come equipped with the correct configurations of trucks and parts!

With accurate roadname and era-specific details, genuine Kadee couplers, and all-metal wheels, we provide you with a high-value model that will provide you with years of enjoyment and curb-appeal. Pricing for RTR models is $54.95, with quantity discounts for direct purchases from Tangent Scale Models.

Click the paint schemes in the grid at right to view more photos and buy!