PLEASE NOTE: Our General American 1949-Design 8,000 Gallon Acid Welded Tank Cars are now sold out at Tangent Scale Models. To see the cars that are sold out but may be available in shops or on eBay, click here. We are now planning a new production of these 8,000 Gallon Acid Welded Tank Cars, which will happen at some point soon. Stay tuned to this site for more information, and please give us a chance to serve you.

The Tangent Scale Models General American 8,000 gallon ICC-103-B-W tank car is a visually-distinctive model that includes details accurate for each paint scheme. Note the distinctive small expansion dome at the top, surrounded by a beautifully-rendered “see-through” safety walkway. Our walkways along the side of the car are also “see-through” safety tread, just like their prototypes. As always, our correct “true-to-life” colors and “hyper-accurate” lettering includes exact fonts and lettering placement. Finally, our scale replicas operate as well as they look, equipped with free-rolling all-metal wheels and Kadee® scale couplers, meaning our models are truly ready to run.

These cars truly were nationwide roamers, hauling acids to manufacturing and other service customers far and wide. Here is the Diamond Alkali car, stenciled for Cleveland OH, but in Chicago IL transferring to another railroad at our nation’s largest rail interchange city. 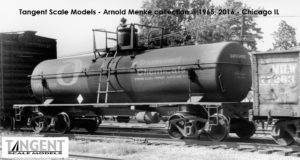 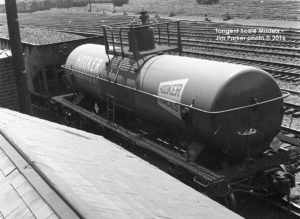 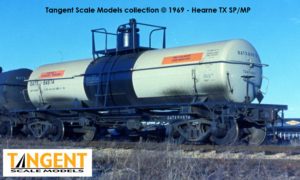 Finally, while these cars were produced 1948-1960 or so, they lasted into the 1990s. Here is a hydrochloric acid-stenciled car that was painted in 1980, with the ACI label mounted in a new location off the car’s side walkway. Yes, we did it right on our model. This car also has “E.I. Dupont De Nemours and Company Lessee” stenciled on the car. 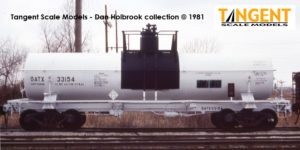 All of the above-pictured cars are available in model form.