Tangent Scale Models is proud to introduce our next production of HO scale General American 10,000 Gallon 1917-Design Radial Course Tank Cars. Our 2022 release includes these 8 schemes, for sale by clicking on the schemes at the right.

By the end of World War I, U.S. production of oil and oil-related products was sharply increasing thanks to the combination of war-related demands as well as demands from home. In order to move oil and new consumer products, tank car producers introduced new car designs. In 1917 General American Tank Car introduced a new general service 10,000 gallon non-insulated tank car. Built in East Chicago, IN, these cars were easily identifiable by their circumferential rivets that surrounded the tank body, with notably different heights between the courses. These “radial course” tank cars utilized steel bolster plates that rise up vertically to hold the tank in place, complete with a “web” section behind to minimize steel consumption. 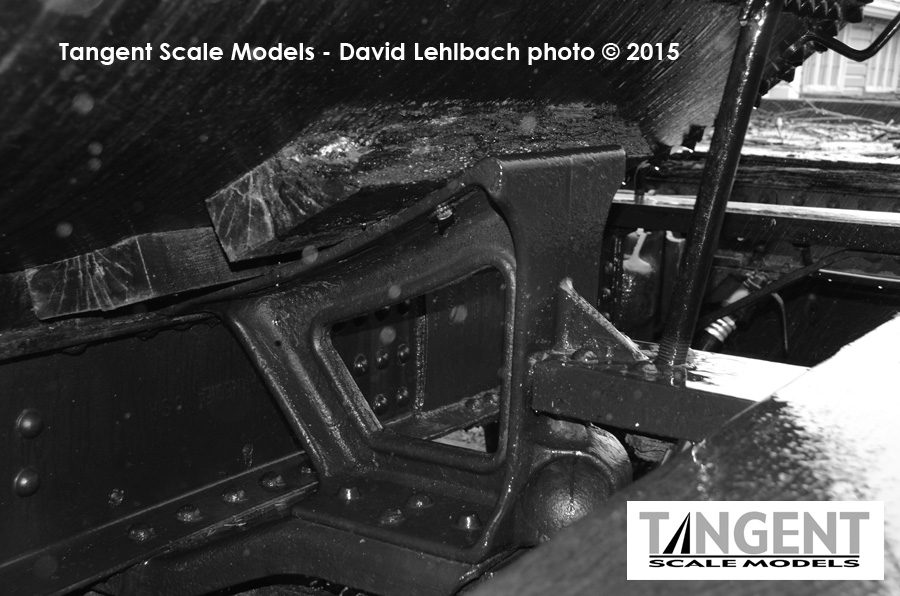 At a time of fairly monochromatic box cars plying the rails, most consumable products and oil shippers proudly displayed their company markings on the tanks. This car design was no exception, with Sinclair being a dominant purchaser of tank cars of this type. Additionally, many smaller oil shippers had fleets of these cars during the oil boom years. Finally, as many oil businesses failed, the cars ended up back with GATC and were restenciled with new owner markings and were placed back into service for a new owner. Between Union Oil of California, Imperial Oil, and other schemes, think of this as one of the first “crude oil” tank cars of consequence. Forget boring present day tanks. These cars were the most prolific tank cars built during the first tank car building boom, and were found everywhere from 1917 to 1970. 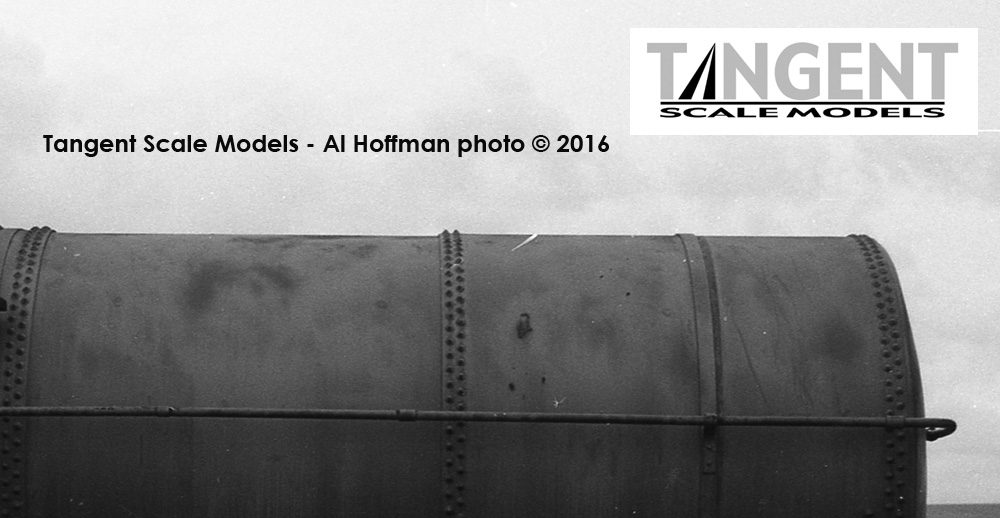 Our 2022 production of these models includes these schemes:
IOX “Imperial Oil Limited” 1918+ is the earliest tank car from our 2022 release, and it is a black car with white stenciling. This car is lettered for “Imperial Oil Limited” which was initially part of Standard Oil before the break-up in 1911. At the time of the break-up Imperial Oil was transferred to Jersey Standard Oil, which was later renamed to Exxon. This car has lots of stenciling on it, and includes imperial gallonages on the ends of the car, but also has “United States Safety Appliances Standard” lettering. Our IOX “Imperial Oil Limited” replicas come with era-correct K-brakes and they are available in four different road numbers. 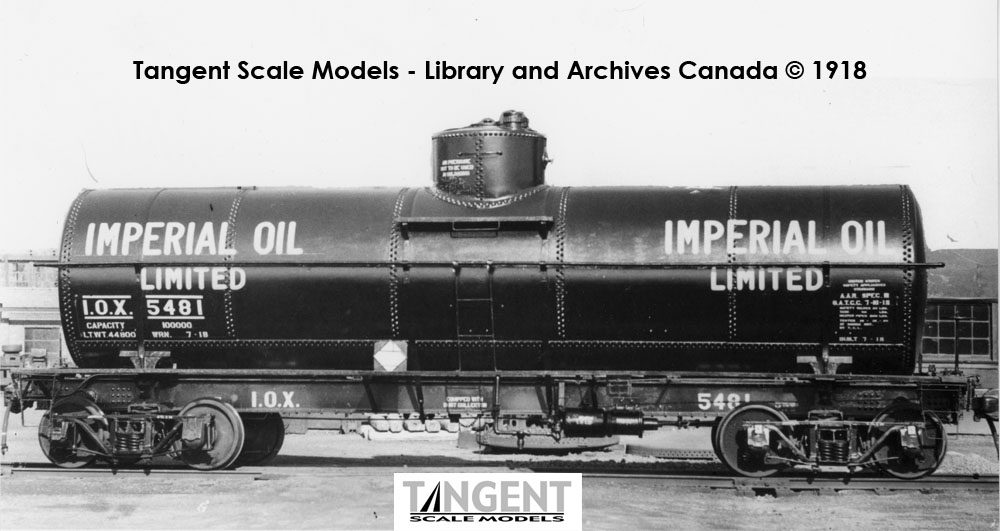 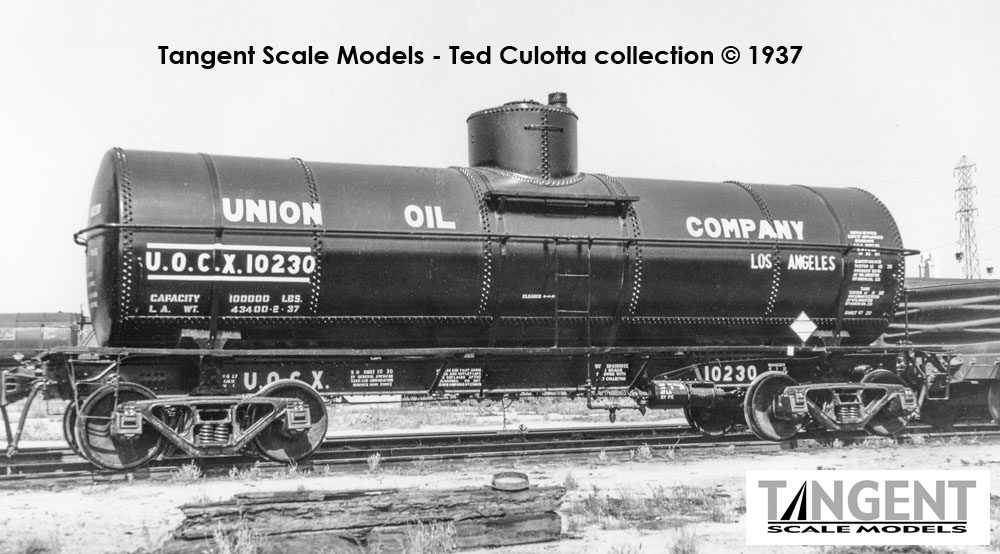 BMX “Barrett Tarvia” 1938+ is a tank car with beautiful “The Barrett Company” and “Tarvia – Good Roads At Low Cost” graphics on the side of the black tank body. The tank’s other lettering shows a 1917 car build date. The underframe also has white stenciling on black paint, including the distinctive “Shipper’s Car Line” “Milton Plant” repaired-painted block of stenciling. Our BMX “Barrett Tarvia” 1938+ replicas come with era-correct K-brakes and they are available with your choice of six different road numbers. 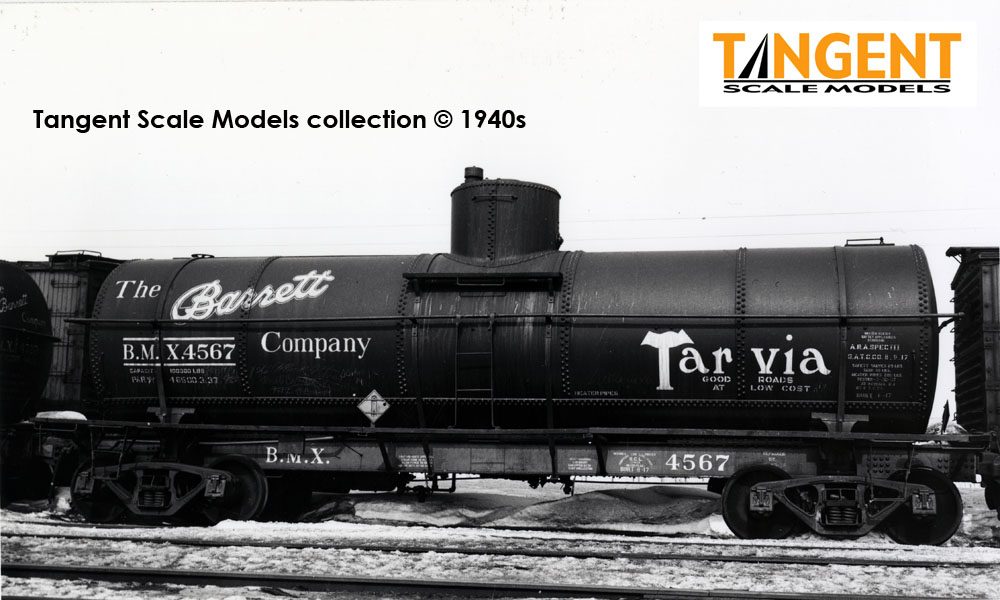 ARR “Alaska Railroad” 1955+ is a tank car offering that many of you have asked for over the years. This tank car is painted in the Alaska Railroad’s silver tank paint scheme with black lettering, with paint and brake dates of 1955. The tank’s other lettering shows a 1919 car build date. The underframe is black with white stenciling. These cars were in various services however the primary service for the fleet was to move oil from North Pole to Anchorage. Our Alaska Railroad 1955+ replicas come with era-correct AB-brakes and they are available in six different road numbers. 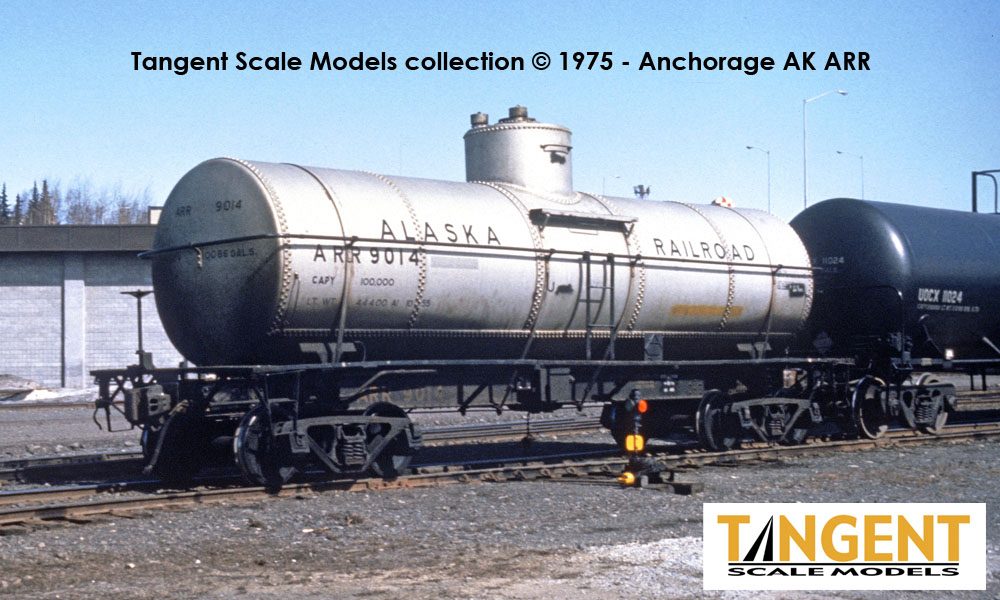 HMHX “Black Lease” 1963+ is a great 1960s-era “lease” car you can use on your layout – a black tank car with white stenciling. It is stenciled for the “Tank Car Corporation of America” with 1963 paint and brake stencil dates. These cars show a lease stencil for “Leased to National Molasses Company.” Our HMHX “Black Lease” replicas come with era-correct AB-brakes and they are available in four different road numbers.

ACDX “Allied Chemical” 1964+ (Rerun) is a prototype repaint scheme that was applied in 1964 and represents an offering for the 1960s modelers out there. The prototype photo on our website shows this car in service in 1968 on the east coast. This scheme wears the red and white Allied Chemical logo that is nicely applied to the rounded contours of the tank. The car stenciling includes separate stencil instances for “Chemicals” and “Plastics Division.” As always, this scheme comes directly from a prototype car photo that matches our model. Our Allied Chemical 1964+ cars come with era-correct AB-brakes and are available in two road numbers (rerun from 2020). 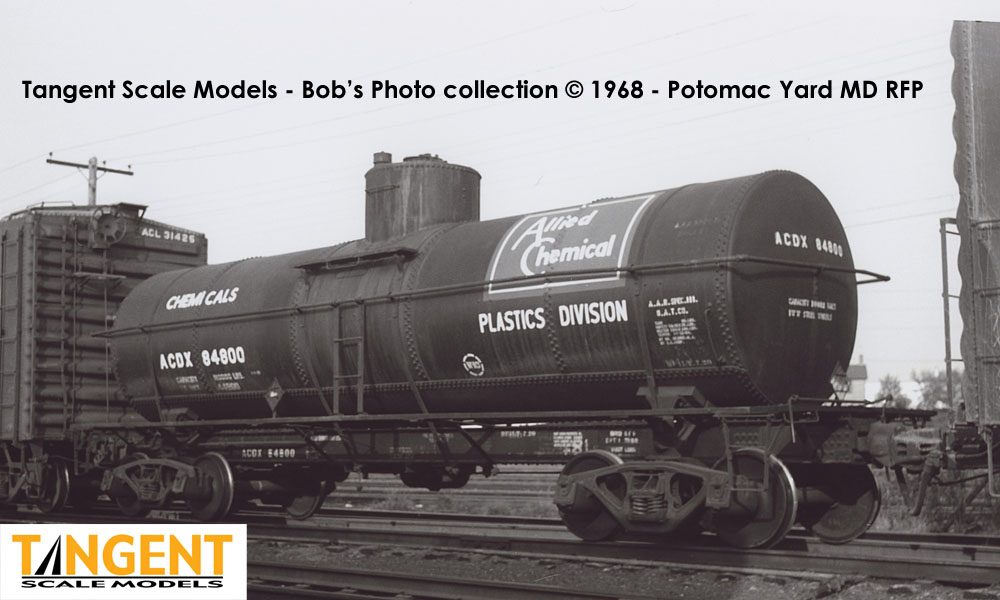 D&RGW “Company Service” 1970+ is a black tank car that has been repainted by DRGW with “MW” stencils, which means a car that is dedicated for company Maintenance of Way service. DRGW also added a yellow rectangular box that says “Freight Car Journal Oil Pueblo” which designates it exact service. The tank car also has the addition of ACI label, something DRGW wanted to track the cars as they move around the DRGW freight network. These cars include a 1962 paint date on the frame, which we have duplicated as a patch. These cars are painted with black paint-out stencil blocks for the road number and other associated paint outs, to reflect the multiple years of changes made to these cars. Our DRGW Company Service replicas come with era-correct AB-brakes and they are available in four different road numbers. 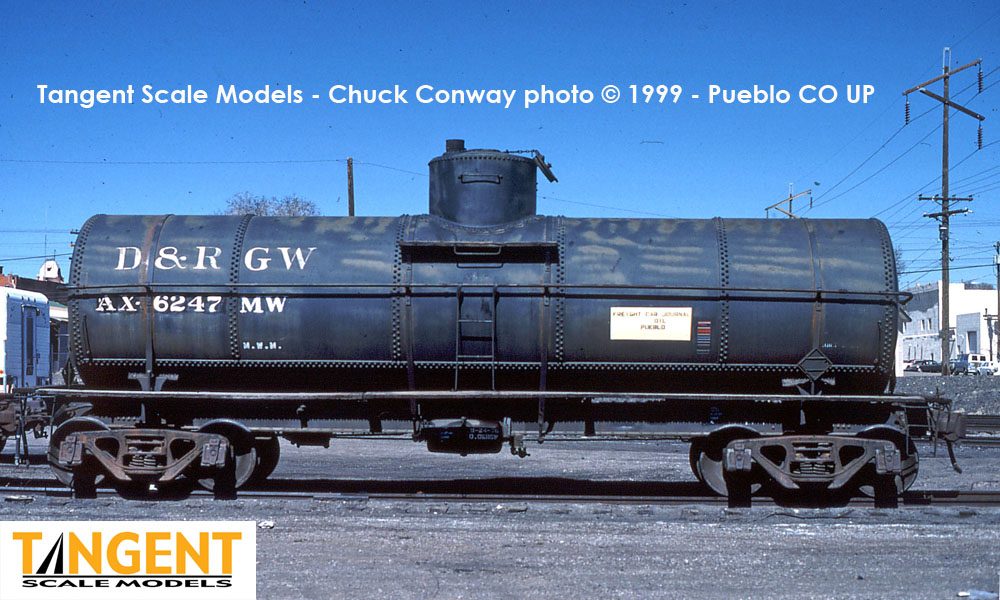 NdeM Nacionales de Mexico “MOW Silver” 1974+ is a railroad-repainted MoW tank car. The “Nacionales de Mexico” railroad repainted this tank car into a distinctive silver paint scheme with black ends. The car has large “Exclusivo Servicio Diesel Compania” stenciling on the side, indicating usage for diesel fuel service. Need to fuel those GP38s! Amazingly, this car retained its K-brake system. We offer this car in one exactly accurate road number, 51063. 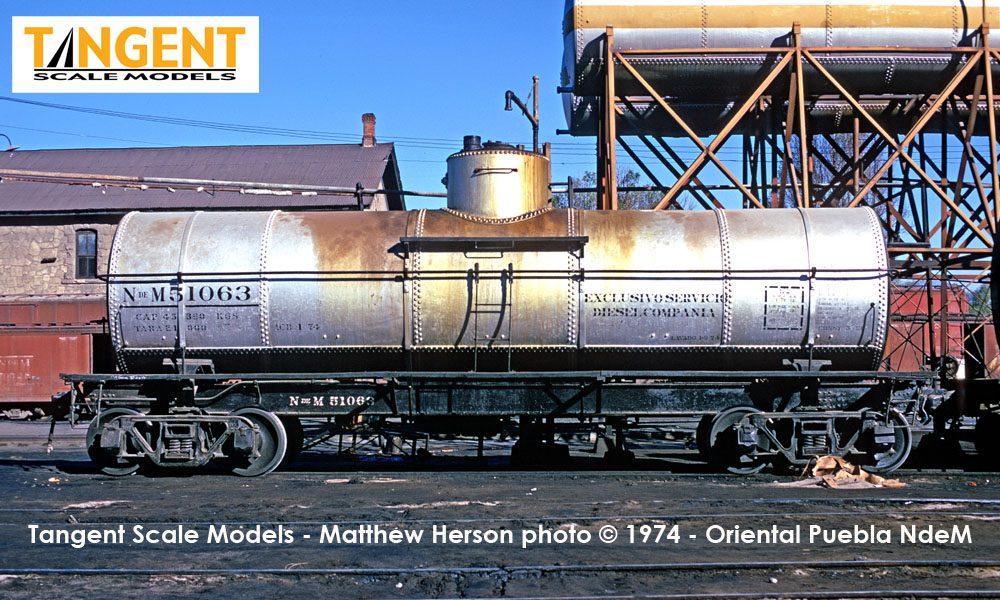 Available paint schemes are listed at right, and you can click on the images to see more photos and order! Prototype images for each scheme are available by clicking as well, mixed in with the model images.

The Tangent Scale Models GATC 1917-Design 10,000 Gallon Insulated Tank Car is a highly-detailed tank car model that includes details accurate for each paint scheme, including KC- or AB-brake variations, with or without Cardwell draft sill springs, and different hand brakes. Other visually-distinctive details for our models include the “see through” bolster section, circumferential rivets, and differing course heights. Our RTR models include correct “true-to-life” colors and “hyper-accurate” lettering including exact fonts and lettering placement. Finally, our scale replicas operate as well as they look, equipped with free-rolling all-metal wheels and Kadee® scale couplers, meaning our models are truly ready to run.

Here is a closeup of the AB-brake system on our 1917 model, which is found on our Sinclair and Allied Chemical tank cars.

Other visually-distinctive details for our models include the “see through” bolster section, circumferential rivets, and differing course heights.

These replicas will certainly be eye-catchers on your layout! Check out the radial courses – they look like nothing else in HO!

Don’t miss out on the Tangent Scale Models General American 10,000 gallon 1917-design radial course tank car! Just like its prototype, this car will stand out on any layout situated from 1917 to 1970, and they went everywhere!